Raw Vegan Influencer Goes On Meat-Only Diet And Feels Healthier, Now Her Fans Are Angry But It Might Be PR Stunt 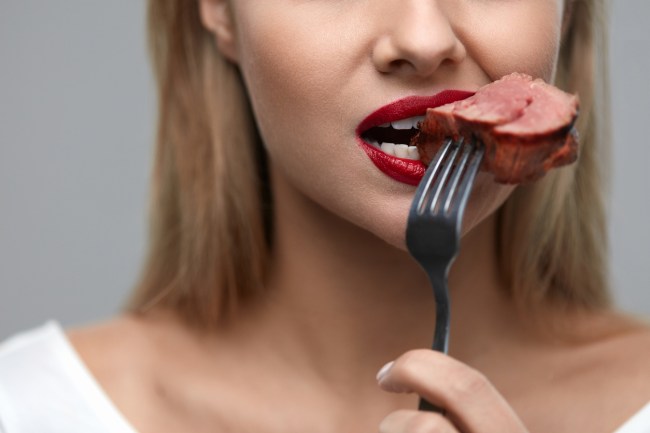 A longtime raw vegan influencer went on a meat-only diet and says she feels the best in years. Now, her fans and followers are angry at her for experimenting with a carnivore diet. However, if you look at the details, this all could be a PR stunt.

Alyse Parker is an influencer who provides lifestyle content on her popular social media platforms. “On this channel I strive to empower YOU to drop all limiting beliefs and step into alignment with your most vibrant self,” the description of her YouTube channel says. Parker has promoted her raw vegan way of life on her social media regularly.

Last week, Parker uploaded a video titled “I Tried The CARNIVORE DIET For 30 Days” to her YouTube channel that has over 728,000 subscribers. The diet change announcement video, which currently has over 225,000 views, was a shock to Parker’s devout fanbase, especially those who subscribed to a raw vegan diet.

Parker first teased her switch to a carnivore diet on her Instagram that has over 209,000 followers.

“The Carnivore Diet first came into my awareness when a close friend shared with me all of the benefits that he was experiencing by eating this way,” she wrote on her Instagram post. “Coming from being vegan 4.5 years, I was hella resistant to the concept of eating ONLY animal foods (aka only meat, seafood, + eggs)⁣. I didn’t make ANY sense to me. It actually sounded pretty f*cking ridiculous.”

RELATED: Vegetarian Woman Ate One Burger And Became A Meat-Eating Butcher
⁣
“But oddly enough, I started to hear story after story from my fellow vegan friends jumping ship, testing out the carnivore diet and experiencing amazing health transformations,” she continued. The carnivore diet means you only eat meat, fish, and animal products such as eggs, cheese, and milk. The carnivore diet is very similar to the ketogenic diet, where carbs and sugars are shunned, but fats from meats are embraced.
⁣
⁣”But I had my own fair share of health struggles and eventually reached a breaking point where I was willing to try anything to function properly again,” Alyse revealed. “I knew I needed to make decisions based on what was in the best interest for my health.⁣”

⁣
Parker claimed she felt immediate health benefits, “I swallowed my pride + decided I’d give it a shot. Full-on carnivore. I woke up the next morning feeling more mentally clear, focused, wholesome, and healthy than I had felt in years.”
⁣

Alyse documented her 30 days of eating only meat in what she called the “Carnivore Challenge.” She first removed all plant-based foods and carbohydrates from her house. Alyse said she would only eat animals who were grass-fed and organic, and she would avoid meat from factory farming.

After the first 10 days, she noticed that she was having digestion problems. She altered her diet from grazing to having two meals a day instead of snacking on meat-based products.

Vegans, who were fans of Parker, were completely supportive of her decision to change to an animal-based diet. Just kidding! The militant vegans lambasted Alyse for experimenting with a meat-based diet because of course they did.

The vegan community was outraged that Parker betrayed them. Not only did Alyse switch sides, she went to the “enemy” by only eating meat and zero vegetables. Many of the commenters labeled the carnivore diet as “extreme,” “unethical,” and “immoral.” Commenters castigated Parker, calling her a “liar,” and mocked her for saying, “As someone who cares about the animals.”

“You’re part of the problem, don’t pretend like you’re part of any solution,” an Instagram user said. A person said, “you lost all my respect.”

“Holy sh*t I have never seen someone turn on themselves like that. Also, didn’t she SWEAR by the same benefits from eating plant-based? There’s kinda zero credibility left to her channel,” a YouTube commenter wrote.

Another asked, “Do you not care about the animals anymore?”

“You were my inspiration at first and now you support the exact opposite,” another follower said.

“Eating meat is not just a ‘thing to try again.’ It’s killing animals for food. It’s killing nature. There’s nothing healthy in that,” another user wrote.

“Disgusting. That animal wanted to live. Shame on you for bashing veganism,” one person responded.

RELATED: Vegan Sues Neighbors For Barbecuing Meat In Their Own Backyards, Now The Neighborhood Is Planning Giant Cookout

It should be noted that her YouTube video was sponsored by ButcherBox, which is a subscription service that sells only meat. That may have had an influence on her glowing assessment of her new carnivore diet, especially since she is being sponsored or paid by the meat purveyor. This entire meat-based diet could very well be a publicity stunt for the meat subscription service.

Parker had been a devout vegan up until March of 2019, when she announced that she had quit veganism.

In August, she said she was changing her personal brand from “Raw Alignment” to her name Alyse Parker.