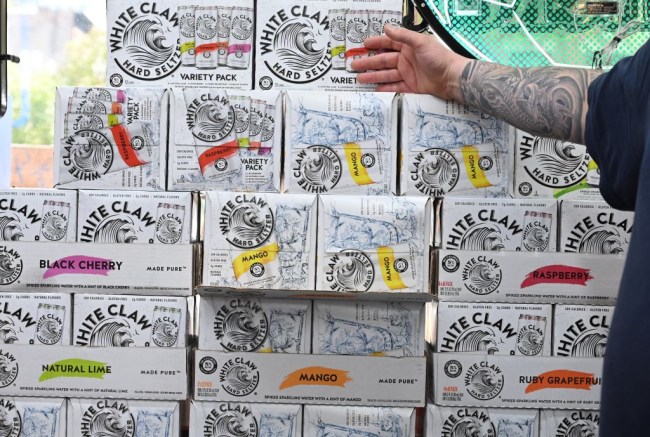 Hard seltzer is the “it” alcoholic beverage right now and for the immediate future. Spiked seltzer sales are expected to grow 300% in 2019, and that comes after growing at a triple-digit annual rate since 2016. The king of hard seltzers is White Claw.

White Claw outsold every craft beer brand in the most recent reported sales figures according to The Daily Beast. White Claw’s crowning achievement came in July when the spiked seltzer brand said they outsold Budweiser. White Claw owns approximately 60% of the hard seltzer market, and the only current competition comes from Truly that holds 30% of the market.

All of this astounding success has made the owner of White Claw a very, very rich man. Anthony von Mandl owns White Claw under his Mark Anthony Group. Anthony is no stranger to developing unique alcoholic beverages that come out of nowhere to dominate. Anthony’s company also owns Mike’s Hard Lemonade.

The Mark Anthony Group founded Mike’s Hard Lemonade in 1999, and it too was an instant triumph. The flavored malt beverage sold out in many places when it was first introduced, much like how there was a White Claw shortage over the summer. The Mark Anthony Group is investing $250 million in new U.S. production facilities to keep up with the increasing demand.

RELATED: Florida Woman Gets Arrested After Drinking White Claw And Proves That There Are Indeed ‘Laws While Drinking Claws’

But it wasn’t always booming success for Anthony von Mandl in the drink business. After graduating from college in the early 1970s, Anthony started up his own wine-importing business in Vancouver. His company struggled mightily early on, and “he was selling German wines, primarily, out of his car,” says wine writer John Schreiner.

Now at the age of 69, Anthony von Mandl’s net worth is $3.4 billion. His company’s biggest earners are Mike’s Hard Lemonade, with U.S. sales of about $1.6 billion.

“This summer Mark Anthony Brands became America’s fourth-largest beer company,” the company said in a statement. “The U.S. business’ growth is 85% this year and accelerating and is estimated to deliver close to $4 billion in revenue in 2020.”

Anthony von Mandl also loves wines and owns more than 1,000 acres of vineyards in the Okanagan Valley in the Canadian province of British Columbia. He also owns his own winery, Mission Hill Family Estate, in Canada.

RELATED: Four Loko’s New Drink Is The ‘Hardest Seltzer In The Universe’ With 3 Times More Alcohol Than The Competition

Mark Anthony Brands still owns and distributes in the U.S. and Canada, but everywhere else, it is marketed and distributed by AB InBev.

Anthony von Mandl has created a monster with the 100-calorie, 5-percent-ABV fizzy drink and continues to build his alcohol empire. There ain’t no laws when you’re selling millions in Claws.

RELATED: Coca-Cola To Compete Against LaCroix, New Aha Seltzer Is Their Biggest Launch In A Decade, Some With Caffeine