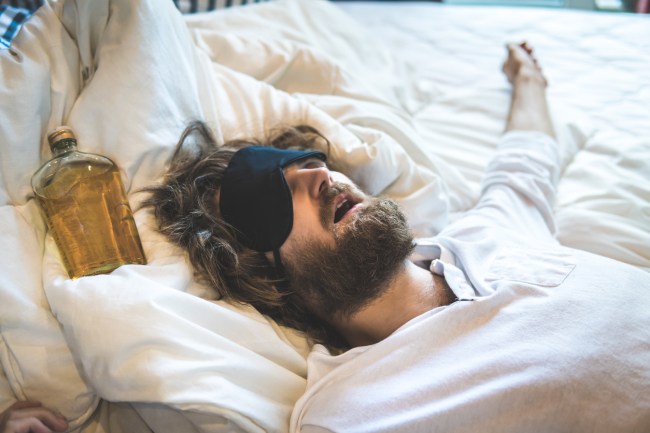 We’re not sure if some of you realize it or not, but ya’ll’s about to get drunker than a couple of shine swilling rednecks standing around a broken down Chevy with the hood popped up. For those of you who have never had the opportunity to relish in any sort of backwoods tourism in the Midwest, that means it’s time to find your big-boy pants and maybe even a liver donor. Because not only is next week a short one – a three-day grind for all of you poor schlubs with a job – but it also brings the day that has throughout the years been given the apt title of Drunksgiving.

Yesiree, next week comes the official drunkest day of the holiday season, the time of year when burned out, working-class stiffs head out to the bars on Wednesday night to get ripped up like the world is coming to an end. Anyone who has witnessed the spectacle of this mid-week booze bender and the depravity that comes with it understands that it’s almost like the only way to prevent the apocalypse is if millions of stinko socialites end up pissing themselves and puke-mouthed by sunrise.

It’s a wild event that can make for an excruciating Thanksgiving, that’s for sure. Let’s just say you will be praying to the porcelain gods for strength if you’re supposed to meet your future in-laws for dinner.

The hangover that festers to the surface of a man following a well-executed evening of Drunksgiving debauchery is one that can have even the most put-together bro on the planet looking and smelling like the ass crack of a dead hobo. In fact, some of the worst hangovers in American history have been documented after a daring ride on the carousel of a pre-turkey tanking. Let’s see, there was the Smith brothers’ king cobra crawl of 1995 and, dare we mention, the West Virginia liver quiver revival of 2012. Yep, not going to lie, that one still hurts a little.

But some of you boys are going out next week to take all of this Drunksgiving business to the next level. Hell yeah, it’s going to be a lot of fun, too, and you already know damn well that you’re going to feel like shit warmed over by the time grandma puts those chicken and dumplings on the table the following afternoon.

We would, however, suggest that all of you pint tyrants try not to over think the impending horrors and savage repercussions that will most certainly arise after 17 shots of bourbon, five beers and a Cuervo chaser strike back with a fucking vengeance. Because check this out. If a recent study on the subject of the severity of hangovers holds any weight at all, the simple act of dreading one can make it a whole lot worse. So yeah, you might want to go ahead and pop a couple of those ibuprofen now.

Researchers at the University of Salford say that people who worry more about the intensity of their hangover actually experience more pain and other unsavory symptoms (thirst, fatigue, headache, dizziness, loss of appetite, stomach ache, nausea and heart racing) when a real hum-dinger sets in. The study, which examined around 90 people between the ages of 18 and 46, found a “significant relationship” between those folks who catastrophized pain and the savageness of their hangover. Therefore, as far as we can tell, over-thinking the sheer punishment that is going to rear its ugly head after a night of heavy drinking really only serves to amplify the hurt and make us more tragic than we need to be. We must tune out that crapulence, our propensity for the dry heaves and hatred of beer squirts and just fucking go for it, ya’ dig?

“These findings suggest the importance of cognitive coping strategies in how people experience hangovers after drinking alcohol,” explained lead researcher Sam Royle. “This may have implications in understanding behavioral responses to hangovers, and also for addiction research.”

It seems that as long as we do not concern ourselves much with the fact that we’re going to be reduced to a pile of yak crap by the time Drunksgiving is all said and done, we should be in decent shape to continue down our drunken path before, during and after our holiday feasts. The good news is that even the sickest bastard in the land will still fare better than those godforsaken turkeys. But just because you’re not afraid of a hangover doesn’t mean that one won’t step up to take you down. Men have been trying to defeat the feel-bads for decades, but there is still no known cure.

You’re only hope of surviving a fiendish Drunksgiving throwdown is to get plenty of sleep the next day, drink lots of water when you first wake up, and don’t be scared to suck down copious amounts of caffeine on the way to those family gatherings. A little hair of the dog probably wouldn’t hurt either. And nobody’s going to judge you for boozing it up too early, because it’s fucking Thanksgiving.