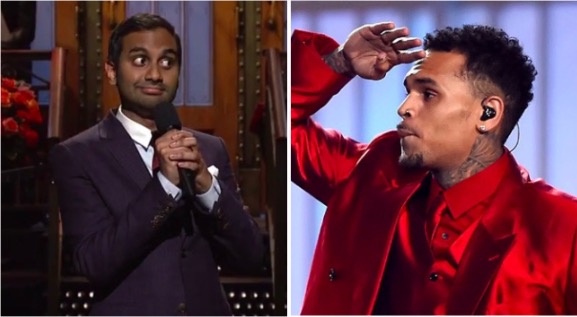 Aziz Ansari hosted Saturday Night Live for the first time ever this past weekend and used his entire opening monologue to make light of the current political landscape. Maybe the most memorable part of the bit was Aziz’s parallel between Trump fans and Chris Brown fans.

“If you think about it, Donald Trump is basically the Chris Brown of politics. And ‘Make America Great Again’ is his ‘These hoes ain’t loyal.’”

The ‘extracurriculars’ Aziz is referring to is that time back in 2009 when Chris Brown put Rihanna in the hospital, brawling in an NYC nightclub in 2012, punching Frank Ocean over a parking space in 2013, a hit-and-run incident in the same year, a felony assault, Ok, I really didn’t expect it to be this long. I give up.

Regardless, Chris Brown took to Instagram to call out Aziz for blasting him in front of millions, by calling him “Aladdin.”

People allegedly had more faith in Chris Brown to respond kindly instead of an overtly racist remark. Silly people.

so @chrisbrown is now not JUST an abuser, but also a racist—are we done supporting him now? https://t.co/HkblGrgSH2

Chris Brown is so lost in the sauce he doesn't even understand how calling Aziz "Aladdin" is EXACTLY why he's the Donald Trump of music. 🙈🙄

Cool. Chris Brown is a racist in addition to being a brutal woman-assaulting monster and mediocre musician. https://t.co/iFNxpp0Xmk

Brown appeared in another video where he claimed he “can’t catch a break.” Dude, you should be in jail but instead you’re a millionaire who could bang any girl in the Women’s March. You transcend irony. You’re doing far better than you should. Take a fucking lap.