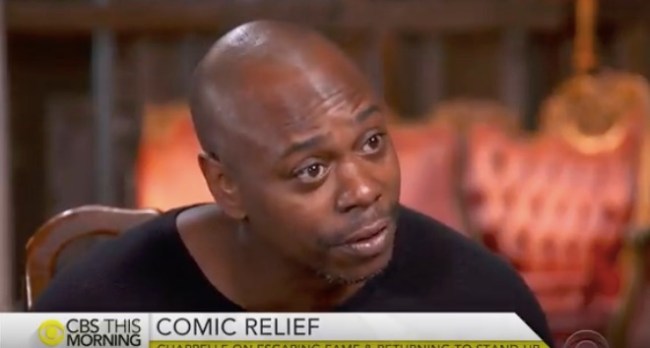 Back in October while performing at the Roots Picnic Festival, Dave Chappelle threw shade at Keegan-Michael Key and Jordan Peele–creators of the wildly successful sketch comedy show Key & Peele–for, in Chappelle’s opinion, drawing heavily on the show he created a decade back.

He told the New York City crowd, “Put some respect on my name. Y’all don’t know what I’ve been through, watching Key & Peele do my show the last five fucking years.”

This thinly-veiled jab by Chappelle was perceived by many as sour grapes, a paranoid cheap shot by a comedy ledgend at a couple of up-and-coming dudes succeeding in the sketch comedy realm.

Chappelle recently addressed his salt toward Key & Peele to CBS This Morning‘s Gayle King, claiming that he’s a fan of the now discontinued show and his gripe was over the show’s  “conventions.”

The Key & Peele bit is at the 7:35 mark of the below interview, but if you’ve got time, check out the entire thing. Chappelle speaks on his reasons for turning down $50 million to keep making the Chappelle Show to jet to South Africa. A decade later, he’s set to make $60 million for three stand-up specials for Neflix,so all’s well that ends well.