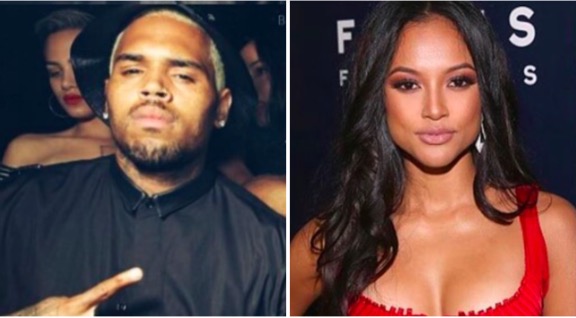 Chris Brown is worth an estimated $30 million, still selling out arenas, and at any given time, you can probably hear one of his songs on the radio. We continue to enable this dickbag even though he has a history of being an unapologetic woman beater. Does Subway run Jared ads after they found out he’s a fucking diddler? No. But we as a society continue to line Brown’s pockets because he makes songs we can grind to in the club. God damnit, our selective outrage.

Brown has made news again and yep, you guessed, the bad kind! According to TMZ, Brown has been ordered to stay away from ex-girlfriend Karrueche Tran after she filed legal documents claiming Brown vowed to kill her and he’s beaten her up before.

Karrueche claims in a sworn statement to the judge, earlier this month Chris “told a few people that he was going to kill me.” She then says Chris told the friends if he can’t have her then no one else can, threatening he was going to “take me out” and “threatened to shoot me.”

Karrueche also says several years ago Chris “punched me in my stomach twice,” and “pushed me down the stairs.” This would have been during the time Chris was on probation for the Rihanna beating.

The legal docs also claim Chris has threatened to harm her friends and even recently threw a drink at one of them.

This dude is going to be born again with a micropenis or a third eyeball or some shit. There has to be justice in the universe for Brown to consistently pull this kind of talent without any consequences.