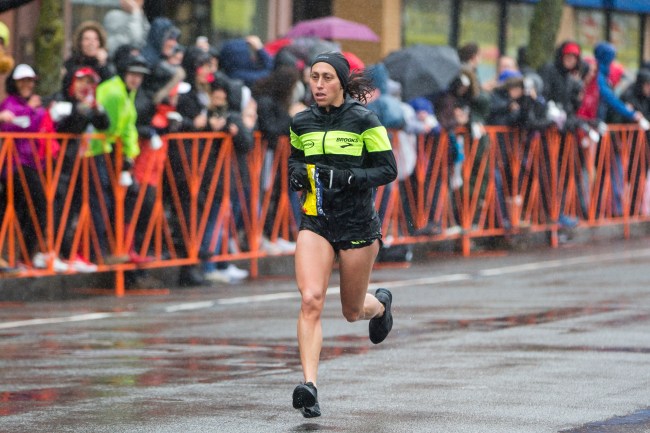 30,000 runners battled relentless downpours and strong winds in Boston this morning to take part in one of the most storied marathons on earth. The 38 degree temperature at starting time marked the coldest start in 30 years, a stark contrast from last year’s 80 degree afternoon. You couldn’t have chosen a less ideal day to run the 26.2-mile race.

The weather was so atrocious that the traditional Patriots’ Day Red Sox game was postponed for the first time since 1984.

Regardless of weather, the show must go on. And for the first time since 1985, an American won the woman’s race. Desiree Linden, a 34-year-old Californian who lost the 2011 Boston Marathon by a heartbreaking two seconds, finished in an unofficial time of 2 hours, 39 minutes, 54 seconds. Her time marks the slowest finish since 1978.

This is the moment Linden broke away from the competition.

The moment Des Linden made the move and got out front
The call with @LisaWBZ @LevanReid @KVSwitzer #WBZ #BostonMarathon pic.twitter.com/7w3wodAUKX

As for the men, Yuki Kawauchi made a late push to win the men’s marathon, the first Japanese man to win since 1987.

Winning the marathon is not only a noble achievement, but it can be lucrative. According to Boston.com, John Hancock Financial Services gives away over $830,000 to the top finishers in the overall, masters, and push-rim wheelchair divisions. The fastest overall man and woman each win $150,000. Second rakes in $75,000, and third takes home $40,000.