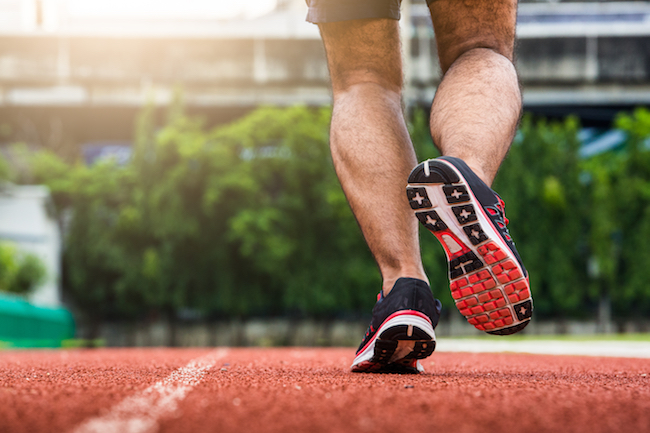 Speed kills. Especially in the NFL.

Every year, the speed and explosiveness of potential NFL players are on display at the NFL combine. Just a couple tenths of a second can mean the difference between going in the first round, and making sick money, or sticking around until the second round or later.

For the average guy, being a blazing fast runner doesn’t come in handy that often but it’s still kinda cool to be the quickest guy on the intramural field or to blow past people at a community 5K. To get faster at chugging around the softball diamond or the indoor track, a steady workload of running drills and weight room training is essential, and who better to ask for advice than three incredibly explosive players trying to make the jump from the NCAA to the NFL.

Nyheim Hines is a 5’8″, 197-pound running back from N.C. State and is being called one of “the most underrated weapons” available in the 2018 NFL draft. Quadree Henderson of Pitt was a consensus All-American and one of the best kick returners in the country. University of Texas-San Antonio corner Devron Davis is 6’0 and as fast as he is intimidating who might be the sleeper pick of the Denver Broncos come April 26th.

The trio took time away from training to discuss their preparations on and off the football field to become an NFL elite player and how the average guy can work these ideas into his own exercise routine.

Hines adheres to a plyometrics routine and exercises like box jumps.

“Most of my best drills,” explains Hines, “come from pushing my body to its limit. Drills 30-yard, 80-yard and 100-yard sprints. I also run hills and incorporate a pulling sled and always run at full speed.”

Henderson preaches speed training and putting in time on a force treadmill along with cone drills and ladder work.

“As a defensive back,” explains Davis, “it’s all about agility and getting in and out of breaks.  This is where cone drills that involve breaking at 45, 90, and 160-degree angles are crucial.”

Finally, all three men warn guys not to dog it out on the course, no matter how tired the body feels.

“Sprinting and speed work are key,” explains Hines, “but you can’t get any faster without running full speed every time.”

Training In The Weight Room

All three athletes feel that training to get faster isn’t just about the time put in on the track. All three men understand and preach that the real training starts in the weight room.

Davis is a fan of Olympic lifts and resistance sprints and preaches stretching before and after each workout. Hines does squats and power cleans to help gain an explosive edge. Henderson is a fan of running on the treadmill at the top speed, on an incline, at 6-second intervals.

RELATED: Why You Need To Change The Way You Think About Cardio

All three NFL hopefuls train at least 5-6 times a week, sometimes more, and split up days into running and weights.

“I run just about every day,” admits Hines.  “I’ve been doing it my entire life. I think it’s made me the player I am so I still train with the track team and push my limits to get faster and maintain speed.” But the running back warns men, especially the average guy at home, not to overdo it.

“If you have a sprint day one day, don’t go out and do sprints again the next day. Mix it up. Long and short distances.”

And The All Important Diet

With hours of training each day, each player needs to stay fueled while not giving in to cravings.

Hines is all about chugging as much water as possible and not just to stay hydrated. “People confuse being thirsty with being hungry. If you feel hungry, just chug some water. The feeling will usually pass.”

Henderson finds the motivation to stay on course when thinking about the big picture. “I know that my dream involves being in the best shape of my life. Knowing you have to do something is all the motivation a player should need.”

NEXT: 4 Sprinting Workouts To Speed Up Your Fat Loss