Looking For Some Running Benefits? Study Shows That Doing It Often Can Lead To A Longer Life 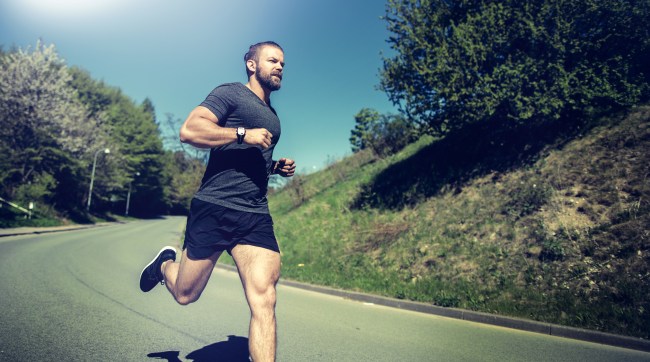 As a competitive runner for the past 20 years or so, I’ve always wondered what some of the true running benefits are. Sure, there are simple answers like practicing good physical and mental health, but, for the most part, you can get those from nearly any form of exercise. I mean, do I really need to put such pounding on my knees, or should I be swimming or biking to have a much lower impact on my body?

But here’s the thing: Studies have shown that there are plenty of running benefits, despite all the knocks on doing it so frequently, or, worse, the weird running side effects that often occur. While that doesn’t mean you should probably go out and run every single day for hours — which, as my co-host Chris Illuminati and I talked about on our We Run This podcast this week, some people (crazily) do — but it does mean that you shouldn’t feel badly about your running habit.

Since I’m a huge supporter of running over every other form of exercise, take a look below at some of the running benefits that some studies claim are helping you more than you’d imagine.

A Longer Life Is Just One Major Running Benefit

According to the British Journal of Sports Medicine, those who run just once per week experience a 27 percent lower risk of all-cause mortality. That probably doesn’t come as a total surprise — since the most obvious of running benefits is that your heart rate increases, thus, pumping more blood through your body — but to see that much of a difference sure as hell might be a little shocking.

Comparably, the same BJSM study identified some interesting stats about running when it comes to cardiovascular-related deaths, with the research showing a 30 percent lower risk of experiencing something like a heart attack and/or stroke, among other things.

Guys, I’ve talked plenty about my shitty eating habits after a run — joking that it’s my reward for running 8+ miles — often chowing on greasy foods like pizza. That probably isn’t the healthiest thing to do, but, hey, at least I’m taking care of myself by running so frequently.

According to the Lung Health Institute, improved lung function is another one of the many running benefits you may experience. Although running itself found cure certain lung diseases, it will help keep the tissue around the vital organ, meaning you’ll be stronger and healthier.

So for all those people who feel like sitting around after a day of work (which happens to all of us), just think about the benefit running brings to your lungs as running motivation to get out that day.

Finally, while we all do pretty much everything we can to avoid getting cancer at any point in our lives, one thing that could help you stave off such a terrible thing is running. The meta-analysis from the British Journal of Sports Medicine showed that people who ran just 50 minutes per week — either all on one day, or split into shorter segments throughout the week — saw a 23-percent lower risk of cancer mortality. This is awesome news.

Researchers added that pace and distance didn’t make a difference — it was simply the duration of the run that lowered the risks. So forget the fact that you’re buddy runs a 6:30/mile pace and you’re a beginning trekking along at a 9:45/mile pace, because, plenty of good comes by just getting out there.

Now that you know some running benefits, join the conversation and start listening to the We Run This podcast, where Chris Illuminati and me talk about our experiences, chat with guests about their trials and tribulations while pounding the pavement, and debate what does and doesn’t sound good when it comes to all things running. See below for more details on where to find us.