Amazing Life-Size Working Bugatti Chiron Is Made Of 1 Million Legos, But You Could Bicycle Faster Than This Car 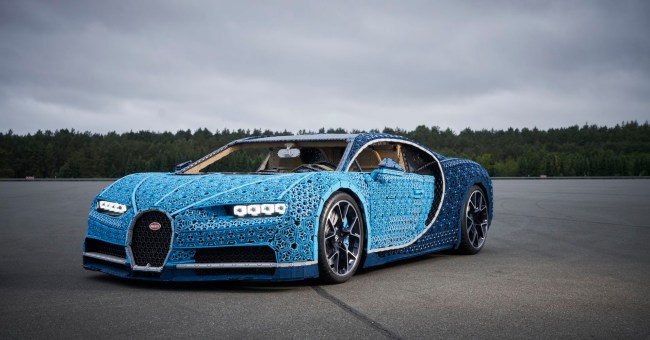 The Bugatti Chiron costs upwards of $3 million, and that’s if you can even get one that isn’t already sold. The beautiful brand-new Bugatti Divo costs $5.8 million and it was sold out before it was even introduced to the public. But there might be one Bugatti Chiron that you might actually afford. Two small caveats, this Bugatti is made out of Legos and it is slower than a bicycle.

Lego set out to make their own Bugatti Chiron, no not a replica in 1:8 scale, they already make a 3,599-piece one like that. Lego created a life-size Bugatti Chiron that actually works. Well, sorta. This “toy” car doesn’t quite zoom at a top speed of 261 mph like the real thing. That’s because this Lego-mobile is actually powered by a Lego motor. Well, a plethora of Lego motors.

The Chiron flaunts an 8.0 liter, quad-turbocharged W16 engine that pumps out 1,479 horsepower and 1180 lb-ft of torque. The Lego version of the hypercar has 5.3 horsepower. The Lego car reached a top speed of 12.4 mph in testing, but engineers claim that it can max out at 18 mph. Hold onto your hats.

RELATED: Bugatti Unveils Stunning $5.8 Million, 1,478-Horsepower Divo Hypercar And I Want One More Than I Want To Breathe

It took Lego over 13,000 work-hours, more than 1 million Lego Technic parts, 2,304 Lego motors from 339 types of Lego Technic elements, and 4,032 gear wheels in the engine to make this Lego dream become a reality.

The Lego Bugatti weighs 3,300 lbs because it does have a steel frame and is powered by two batteries, an 80-volt for the motor and a 12-volt for the steering and electronics inside the car. So Lego created an electric vehicle and that’s something that Bugatti has never done.

The Lego version has a functioning speedometer and working active rear spoiler, not that either of those things are necessary for traveling at 12 mph. The Lego Chiron also has a working steering wheel, doors, headlights, taillights, and brake pedal. Considering that over 90% of the car is made out of Lego pieces is extraordinary. 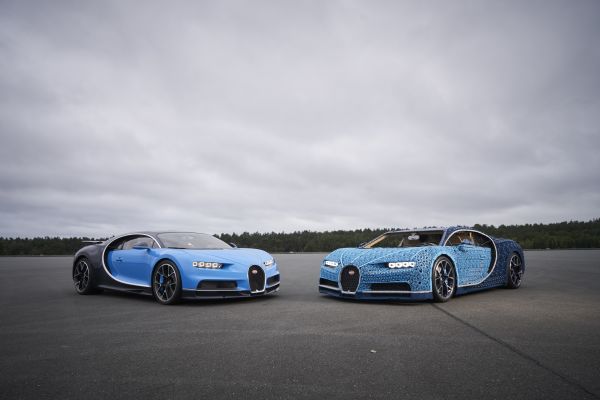 This is the first time that Lego has ever created a fully-functional life-sized car out of building blocks. The Lego Bugatti Chiron was created by 16 Lego designers at its facility in Kladno in the Czech Republic. There are 16 people who have a job where they get paid to play with Legos. Think about that for a second and figure out where you went wrong in your life.

Former 24 Hours of Le Mans champion racer Andy Wallace was able to unleash this Lego car. “From 20 meters away it’s not obvious that you are looking at a Lego car,” Wallace said. “I can only imagine how much time and effort went into making this model.” 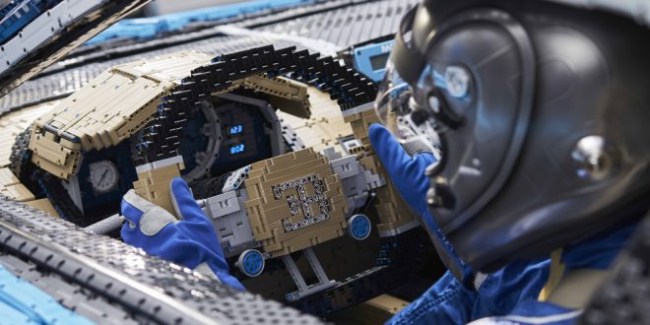 You probably won’t be able to get your hands on this Lego Bugatti Chiron either, so it looks like you’re stuck with the toy version of the one-of-a-kind supercar.

RELATED: Bugatti’s New $3.3M, 1500HP Chiron Sport Is One Of The Most Beautiful, Beastly Hypercars Ever