#Drag Race
BroBible may earn a commission if you buy a product or service via links in this article.
by Paul SaccaMarch 3, 2019 12:49 am 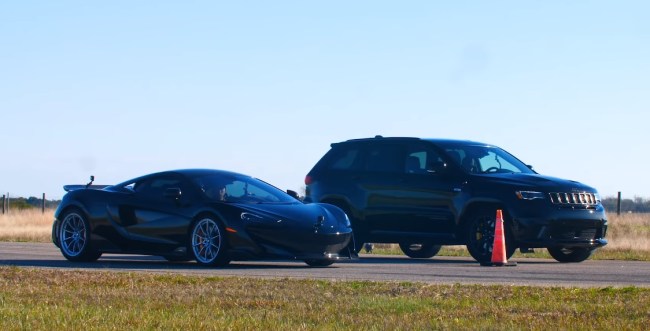 Hennessey Performance took an already lightning quick Hellcat-powered Grand Cherokee Trackhawk and made it even more lightning quick. The HPE1000 upgrade of the Trackhawk takes the Hellcat’s 6.2-L HEMI V8 and adds a 4.5-L supercharger, which provides 1,012 hp and 969 lb-ft of torque.

Hennessey Performance was so confident in their blazing fast truck that they pitted the Trackhawk against a McLaren 600LT. Now, this is a stock 600LT, so we’re only looking at 592 hp and 457 lb-ft of torque from a 3.8-L twin-turbo V8 engine.

While the Trackhawk has an advantage in horsepower and torque, the McLaren is much more aerodynamic. McLaren’s latest Super Sport Series car weighs in at only 2,749 lbs thanks to its lightweight carbon fiber body that generates 221 pounds of aerodynamic downforce. Meanwhile, the husky Trackhawk tips the scales at 5,363 lbs.

So who ya got? Will it be the powerful Grand Cherokee Trackhawk or the sleek McLaren 600LT?

RELATED: Watch A Corvette ZR1 Destroy A Dodge Demon In A Drag Race

The two performance vehicles engaged in three drag races and the first one was not even close. The family SUV smoked the British supercar. In the first race, both automobiles launch at the same time and the McLaren doesn’t use any launch control. The Jeep pulls away by multiple car lengths before the McLaren recoups some ground thanks to aerodynamics. The Trackhawk has a 0 to 60 time of a mere 2.7 seconds and it definitely showed in the first drag race.

The second race was a much different story. In this one, the 600LT used launch control and destroyed the Trackhawk. The McLaren flaunted its incredible acceleration that does 0 to 60 in 2.8 seconds and the quarter-mile in 10.4 seconds.

The third and deciding race went to the McLaren. Once again not using launch control like the first race (this time possibly from a lack of gas), McLaren made up for the lackluster first attempt. While the Trackhawk lost to the McLaren, it made trucks everywhere proud in that it gave the 600LT a run for its money on the track.