GOALS: This Snowboarder Lives In An Incredible Tiny Cabin The Top Of A Mountain With His Own Personal Rope Tow

It’s safe to say that every Bro dreams of living off the grid in some way, shape, or form. Maybe it’s a private island. Maybe it’s a penthouse above the noise and bustle of a city street. Maybe it’s a McMansion surrounded by a moat of ‘roided up crocodiles. It’s the ultimate Henry David Thoreau fantasy.

Pro Snowboarder Mike Basich lives just outside of Truckee, California in Lake Tahoe. The 40-acre plot of land he calls home in the Sierra Nevadas is every Bro’s rustic DIY dream home. The cabin itself is small — only 228-square-foot — but he built the entire thing himself over the course of a couple years. It sits at the very top of a mountain, which means it’s about as ski-in, ski-out accessible as it gets. It’s only accessible via snowmobile or his veggie-oil powered Snowcat during the winter, according to Teton Gravity, where the video went viral last March. He has a rope tow on his land, though, for his own private ski slope.

Basich lives in backcountry oasis with his dog. In the event of company, there’s wood-fired hot tub. But the modern amenities stop there.

This, after all, his his pad in the mountains: 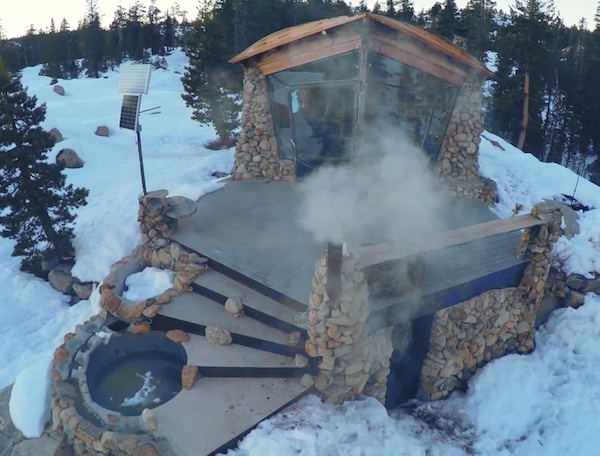 Bros, this is #GOALS