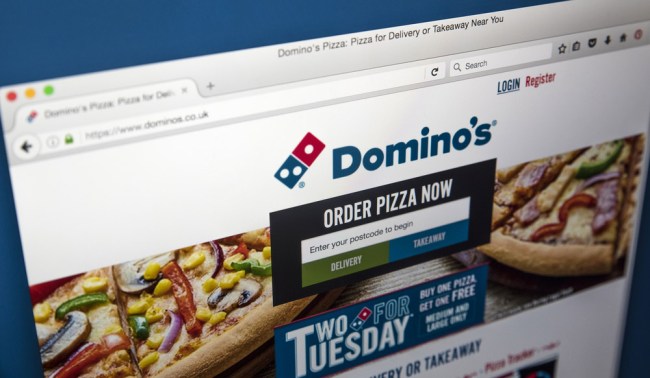 Moms and technology, am I right? The two don’t always work very well together. One perfect example of this is this mom who tried to order some pizza from Domino’s using their app. She didn’t quite get the pizza she was looking to purchase and naturally, since it was so bad, it ended up going viral.

Why did it go viral? Because the results of this mom’s first try at using Domino’s app to order a pizza ended up looking like this…

My mom used the dominos app for the first time and forgot to get sauce and cheese. Dead pic.twitter.com/cAhd1ymMsg

“My mom used the dominos app for the first time and forgot to get sauce and cheese. Dead,” tweeted @WhosRobertSeed.

Oh mom. Over 12,000 retweets and 36,000 likes later they did finally get their pizza with sauce and cheese. However, it wasn’t from Domino’s.

Delete the app and DM us.

“Delete the app and DM us,” tweeted DiGiorno Pizza, and then they came through.

We'll even include these things called cheese and sauce 😂

Collecting them over there 😬

Shits already selected on there. She intentionally removed it

Unintentionally. That's the funny part. Get the net

Apparently this mom, amazingly, isn’t the only to have had this happen to her…

I made that mistake trying to un-supreme half a pizza once. Their UI made it not obvious.

Mom didn’t seem to mind all the attention. In fact she thanked her son for it…

Thanks for making me famous BJ

Next time I am calling… the old fashioned way 😁