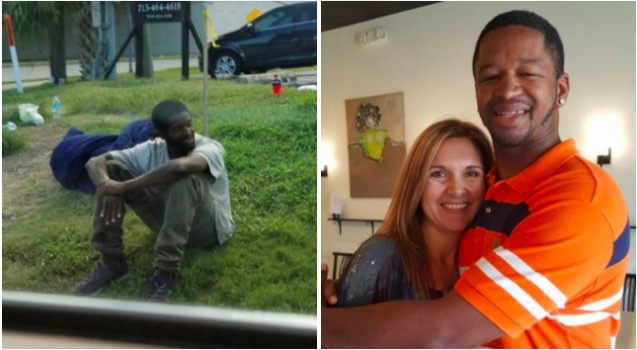 My father implicitly taught me that showing emotions is for skinny-armed men who are incapable of bottling up their feelings and releasing them by blowing up for a trivial reason on an idle Tuesday like real men.

Well sorry, dad. This story almost brought me to me knees. I advise you bros to drop the stigma of suppressing vulnerable emotions and give yourself to the tear-jerking tale of Victor Hubbard and Ginger Sprouse.

For three years on her way to work, Ginger Sprouse drove by Victor Hubbard as he sat on the same street corner, pacing, talking to passersby, and occasionally dancing.

Finally last June, Ginger stopped her car to say hello to Hubbard and ask him why he maintained in the same place for much of the day, everyday. Victor, a 32-year-old homeless man who suffers from a mental illness, told Ginger that he didn’t want to leave the street corner because his mother wouldn’t know where to find him if he left. Turns out, his mother dropped him on that corner years earlier to dispose of him, and his fruitless hope that she would return kept him anchored to the same corner for nearly 1,000 days.

“He was so sweet,” Sprouse told NBC News. “He didn’t ask me for anything. He didn’t want anything. He was just excited that I wanted to stop and talk to him.”

Ginger, who owns a business offering cooking classes in Nassau Bay, Texas, began visiting Victor every day on her coffee breaks on a mission to learn more about what led to Victor’s unfortunate circumstances. She learned that Hubbard has been on and off the streets for 10 years in Kemah, Texas, but local social services had been unable to locate his mother in the past three years, according to Today.

Ginger grew attached to the man, who was exceedingly kind and polite, and on one particularly wintery day in Texas, Sprouse and her husband took Hubbard into their home. Since then, he’s been staying there with them on and off ever since.

Victor has inspired Ginger to create a GoFundMe page and a Facebook page called ‘This is Victor’ to help raise money for clothing, food and shelter. The GoFundMe has already raised $31,000 of its $35,000 goal at the time of me writing this. Some of the money has been allocated to much needed medical procedures.

But unlike most stories of this nature, Ginger doesn’t just plan on cleaning him up, getting some good publicity, and then sending him right back on the corner. She and her husband have made a permanent commitment to see that Victor’s life transform for the better.

Sprouse has taken in Victor to her home full-time until a better option becomes available, as well as hooked him up with a job in the kitchen at Art of the Meal, her cooking business.

“If we help him, we cannot just clean him up and give him a shower and throw him out there and say, ‘OK, little bird, fly,”’ she said. “It’s a lifetime commitment.

“We kind of had to make that decision. Is he really a part of our family? Do we really mean it when we say that he’s going to be in our lives for the rest of it if that’s where he wants to be? And we said, ‘Yes, he is.”’

If you’re feeling generous today or are in need of some good karma, help the cause by donating whatever you’re capable of on Victor’s GoFundMe page.