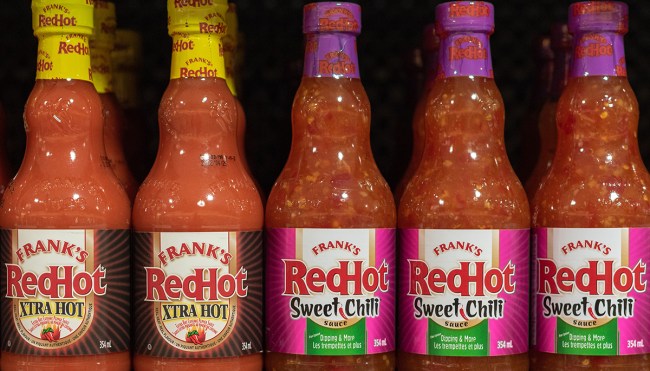 Hot sauce is the elixir of life.

This is not just a matter of opinion, but a matter of scientific fact: peppers (regardless of Scoville intensity) contain an ingredient called capsaicin that is a natural stimulant, releasing all sorts of pleasurable endorphins into the brain.

Back in college, I had a psychology professor who declared that, physiologically and psychologically, peppers and hot sauces are sort of like food cocaine: In addition to making you feel like a million bucks, they speed up heart rate and metabolism.

There’s a good reason why once you go down the spicy hot sauce rabbit hole, you’re addicted for life. And loving that piquant burn-of-the-mouth? It makes you more of a man, according to science.

I am a big aficionado of hot sauces, so I threw together a power ranking of the widely available ones you can buy at a grocery store. These are the best mass-produced hot sauces money can buy for under $5, according to… Me. No one else, just me.

I’ve tried them all, many times, including for lunch when I doused Cholula all over a steak burrito bowl from Chipotle.

Please note that I didn’t include all the small label sauces you get at specialty stores and boutiques; I have an entire arsenal of sauces like Scorned Woman and Dave’s Insanity Sauce, but for the sake of a broad conversation, we’ll exclude these since most grocery stores don’t carry them.

Taste is subjective, so I’m sure your power-ranking of best hot sauces is quite different from mine.

Why it rules: Because 85% of the time you ask for hot sauce in a restaurant, they hand you this. Every kitchen has a bottle… or five. Plus the little mini bottles can be stashed pretty much anywhere for hot sauce on the go.

Why it rules: Because it’s the Heineken of hot sauces. Not everyone likes it, but if you do, you really like it. Does wonders on pizza.

Why it rules: Because a cup of chili wouldn’t taste the same without it.

Why it rules: Because it’s the City of Buffalo in a bottle.

Why it rules: Because the sacred area next to the soda fountain inside every Chipotle restaurant is heaven on earth.

Why it rules: Because it tastes like someone wrung smokey pepper oils out of the beards of Duck Dynasty cast members. Put it in a Bloody Mary with a lot of horseradish and thank me later.

Why it rules: Because they make awesome little packets for emergency hot sauce situations.

Why it rules: Because it’s the Natty Light of hot sauces; Always the cheapest on the shelf and always does the job.

Why it rules: Because it’s made by José Cuervo, actually packs heat, and comes with Papa John’s when you ask for it. Also: Garlic. All of the garlic. What it can do to scrambled eggs is magical.

Why it’s the best hot sauce you can buy: Because it’s a pepper sauce first. Unlike Tabasco and others on this list, there’s more pepper than there is vinegar in a bottle of Crystals.

Also, you can generously apply a quarter of a bottle to pretty much anything and it tastes amazing. No bowl of soup is the same without it.