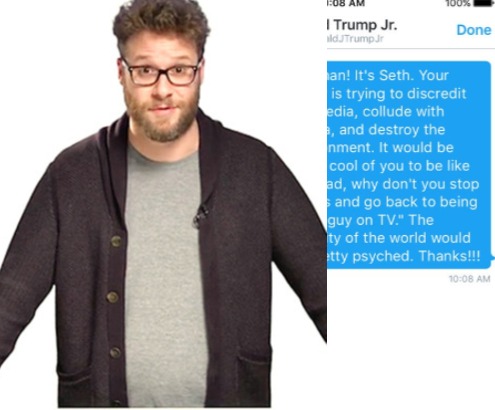 Seth Rogen, a lovable Canadian, noticed that Donald Trump Jr. follows him on Twitter. So he did what anyone tries to do in that situation — Slide into his DMs. Except this is for the sake of humanity, not like the time I noticed Kylie Jenner followed the BroBible Twitter for a hot second and I threw out a “tell Tyga we said sup?”

Yo! @DonaldJTrumpJr! I noticed you follow me on Twitter. Please ask your dad to resign before he destroys the planet. Thanks dude.

Let's see if this works! pic.twitter.com/q5b3d8U4Nx

If @jasoninthehouse won't investigate Flynn's ties to Russia, maybe I can get his boss' son to help me do it. pic.twitter.com/bmOfDDepC3

Save us with those”uh-huhhhhhh” laughs, Seth. You and your bong of justice are our only hope.