The Snapchat Co-Founders Saved SNAP Inc. Stock Specifically To Make Their Friends Rich As Hell Too 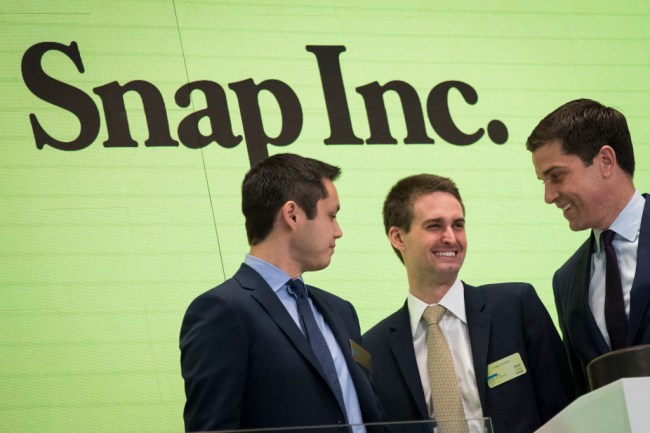 Being a billionaire is great and all. But what’s the point of being rich beyond your wildest dreams if your friends aren’t rich as well? That’s the dream — Getting rich with your best buddies so you can ball out and live the American Dream together.

Now that they’re officially billionaires, that’s what 26-year-old Snapchat founders Evan Spiegel and Bobby Murphy plan on doing. Yesterday Snapchat went public on the New York Stock Exchange, making both Murphy and Spiegel worth about $3.9 billion each at the IPO price of $17 a share. After the IPO, Snap Inc’s shares have rocketed to over a $27, up 60%.

The two have a plan in place to make their “friends” rich in the IPO event. According to Business Insider, they saved a special pool of 14 million SNAP Inc shares at the IPO price of $17 for their friends. So it works as a securities option, with their friends able to buy in at $17 a share, even if the public market price is significantly higher.

The company said it was going to hold about 14 million shares, or about 7% of the stock, at the IPO price of $17 for “certain institutions as well as individuals who are friends of our executive officers, which may include existing investors or their affiliates,” according to the company’s S-1 filing dated March 1.

The real gem for these folks is that, unlike Snap insiders and some other investors, the friends likely aren’t subject to a lockup that keeps them from selling the stock right away. Snap’s stock popped when it went public on Thursday morning. After opening at $24 per share the shares have continued to rise – and are now 60% higher than the IPO price.

If Snapchat’s stock price rockets to the moon, there’s millions and millions — if not billions — of dollars to be made in those options. Murphy and Spiegel’s Bro move like this for their friends reminds me of how billionaire GoPro founder Neil Woodman made good on his promise to give 10% of GoPro to his college roommate, Neil Dana. Dana. Dana exercised his 4.7 million stock options in GoPro to the tune of $229 million in May 2015.

Given this news, all of us who started BroBible back in the day REALLY have some regrets about not responding to Evan’s e-mail back in his frat days at Stanford. Maybe there’s still some room in that share pool for us “certified Bros”

snapchat wants $10 billion. never forget when evan spiegel was just pitching brobible and we were like "da fuck?" pic.twitter.com/SWxKWmEcPH

@ajs i cut off the pic back in the day! just looked it up again, so many bros! pic.twitter.com/pFcxiR71AJ

All the Bud Lights my blogger salary can buy next time you’re in New York, Evan and Bobby. But seriously, congrats and props for pull a Bro move in your IPO for your friends. That’s the dream.