VIDEO: North Korea Advancing To ICBM With Latest Launch Touted As ‘Most Powerful’ 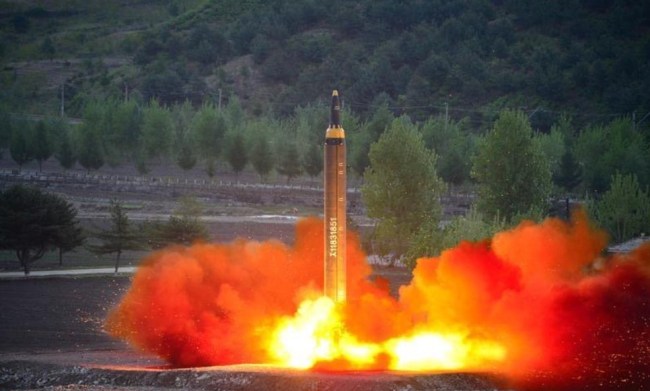 Sunday’s launch was supervised by leader Kim Jong Un and experts have already deemed the missile to be North Korea’s “most powerful” and “most successful.”

AP Explains: The missile North Korea launched on Sunday appears to be the most powerful the country has ever tested. https://t.co/KOjeN2vTIv pic.twitter.com/i0DY2wyYLh

Pyongyang released a video of the ballistic missile and warned the world that it has the capability to carry a “large scale heavy nuclear warhead.”

Funny, they didn’t release video of all of the failed missile launches.

North Korea’s state news KCNA claimed that the new ballistic missile is named Hwasong-12 and that the test launch verified “guidance and stabilization systems” and the reliability of a new engine, as well as the warhead homing feature that allowed it to survive “under the worst re-entry situation” and detonate accurately.

KCNA stated that the missile was fired at the highest possible angle to avoid affecting neighboring countries’ security and flew 489 miles after reaching an altitude of 1,242 miles. The missile landed in the sea near Russia.

Experts said Sunday’s launch would have had a range of at least 2,500 miles if fired at a standard trajectory. However, if North Korea wants to reach the mainland of the United States they will need a missile that can travel 4,800 miles

That “represents a level of performance never before seen from a North Korean missile,” Washington-based monitoring project 38 North said.

“It appears to have not only demonstrated an intermediate-range ballistic missile (IRBM) that might enable them to reliably strike the U.S. base at Guam, but more importantly, may represent a substantial advance to developing an intercontinental ballistic missile (ICBM),” the thinktank said.

Kim Dong-yub, a professor at Kyungnam University’s Institute of Far Eastern Studies in Seoul, said that the missile appears to be a quicker-than-expected advancement in Pyongyang’s ICBM program.

Kim Jong Un said “if the United States were to face our republic with a harsh, miserable blunder, the U.S. would not be able to suffer the greatest disaster ever.”

On Sunday, White House press secretary Sean Spicer said: “With the missile impacting so close to Russian soil—in fact, closer to Russia than to Japan—the President cannot imagine that Russia is pleased.”

“I would like to confirm that we are categorically against the expansion of the club of nuclear states, including through the Korean Peninsula,” Putin told reporters. “We are against it and consider it counterproductive, damaging, dangerous,” he said.

On Monday, newly elected South Korean President Moon Jae-in Moon responded to the launch by sending special envoys to the United States, China, Germany, Japan, and Russia to detail on how his country plans to deal with their defiant neighbor.

The U.N. Security Council is due to meet on Tuesday to discuss the North’s latest missile launch at the request of the United States, South Korea, and Japan. It is expected that the U.S. will ask for tougher sanctions against the isolated regime.

Despite all of the attention that North Korea has received recently, a poll of 1,746 Americans by the New York Times shows that we have no fucking clue where North Korea is. Only 45% of men could find North Korea on a map and an embarrassing 27% of women could find the isolated nation on a map of Asia.

Americans show a pathetic knowledge of geography when asked to point out North Korea on a map. Australia? Really? pic.twitter.com/SBUdFzGop2

Let’s hope North Koreans are as lousy at finding the United States on a map, especially those who program missiles.