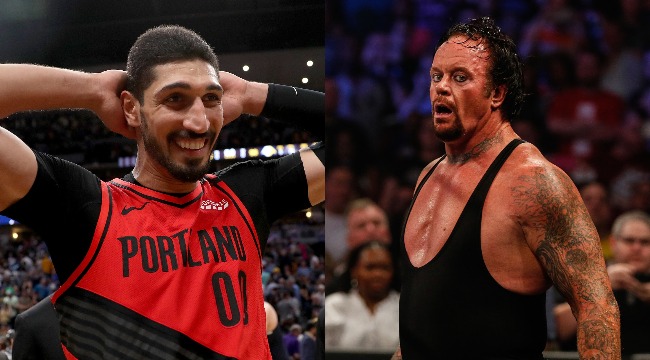 I don’t think I’m telling tales out of school here when I say that if the NCAA saw one of it’s players on fire, they would urinate on them, but only to steal their wallets before setting them ablaze again.

Trail Blazers center and 2011 third overall pick Enes Kanter felt the iron fist of the NCAA while at the University of Kentucky in 2010, when the organization declared him ineligible to not only play in the games, but even practice with the team. His crime: receiving over $33,000 in impermissible benefits while playing for the Turkish club team Fenerbahce two years prior. Send him to the chair!

During that lonely year at Kentucky, Kanter stayed sane by consuming as much professional wrestling as possible. He appeared on our Endless Hustle Podcast this week to describe how the NCAA ‘dictatorship’ sparked his love of pro wrestling, the Undertaker, and provided him with a vision of his life after basketball.

What's next for @EnesKanter after the NBA? @WWE. (Yes, really!)

“I don’t know how long I’ll be playing this game. I hope for another four or five years. If my knees or my body can take a basketball life. Other than that, the WWE is ready. As soon as I’m done here I actually super excited about it.

I’m really serious about it because when I couldn’t play in college, when the dictatorship NCAA didn’t let me play basketball, that was one of my hobbies. Just watching wrestling. It was fun and I got to meet The Undertaker with the Knicks. And I was like, I think this is going to be my life after this.”

[Related: The FBI Installed A ‘Panic Box’ In Enes Kanter’s Hotel Room After Receiving Weekly Death Threats Over His Criticism Of Turkish President]

Enes claimed the front-runner for his WWE stage name is Turkish Delight, but Nick Collison’s suggestion of Enes The Menace is still in the mix. He then delved into his admiration for The Lord of Darkness.

“What Undertaker means to WWE is like nothing you can ever explain with words. When I met him first, my knees were shaking. I was super excited, super nervous at the same time. I actually have a video of me and him, him doing the eye roll thing and I thought it was fake, I thought he was loosening the contact lens, the white ones, but no, he can actually do it.”

Tune into our entire fascinating interview with Kanter below. We also discuss the weirdest things about America, Russell Westbrook (the person), the current state of the NBA, becoming an enemy of Turkey, and much more.