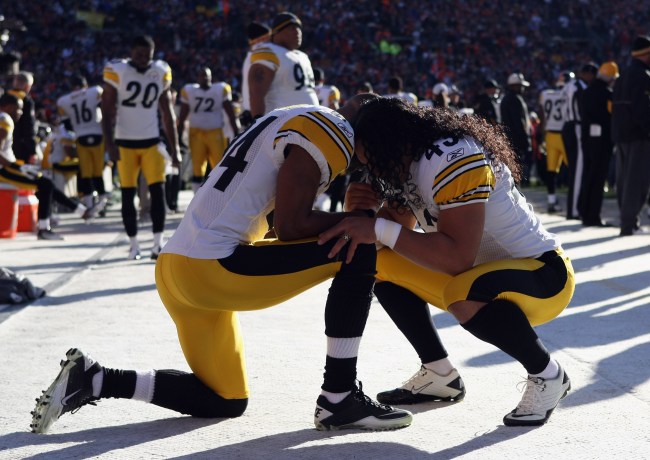 There are very few people on this planet who get talked about like they’re already dead. Who are impactful enough to inspire people to give them their roses while they’re still kickin’.

Troy Polamalu is one of those dudes.

On a team with Hines Ward, James Harrison, Big Ben, Emmanuel Sanders, Ike Taylor, Mike Wallace, Antonio Brown, there was absolutely no question who the singular alpha was: the guy who showed up to the facilities with velcro shoes and clearance rack threads.

Two-time Super Bowl champ and career Steeler Ike Taylor joined our Endless Hustle Podcast to discuss his admiration for his former teammate and Hall of Famer, and football is just a slither of it.

"I've seen grown men & women cry just to see the dude..he's above & beyond not only a football player but a human being."

“Me and Ryan Clark talk about this all the time. We had courtside seats to all those spectacular plays. We used to go back to the sideline, Troy’s throwing the cross sign up, thanking God like he always does, and we’re looking at each other like, ‘Man, did you just see what he did?’ Only Troy can do that.”

“For me, it was spiritual and instinctive. When we get on the phone we say, ‘I love you.’ My son calls him ‘Uncle.’ Troy’s in my will in case something happens to me or his mom or anybody in my family, Troy will have to take care of my son. That’s just how for real and genuine it is between us two.

RIP, TP could have been a Michael Jackson of the league, but never wanted the spotlight. I have seen grown men and women cry just to see the dude. Just to try to touch him.

He never wanted none of that. It was about his teammates. Like bro, ‘What can I do to make us better?’ Damn, TP, you’re doing everything you’re doing, plus more. It’s like golly, this dude is above and beyond not only a football player but a human being.”

Taylor’s comments about former teammate Antonio Brown? Not as glowing.

Listen to our entire interview with the wise Ike Taylor below. We talk about his decade-long NFL career, the exceptional talent of young receivers in the league today, the downfall of Antonio Brown, the ‘Camp Eyes’ phenomenon, & more!