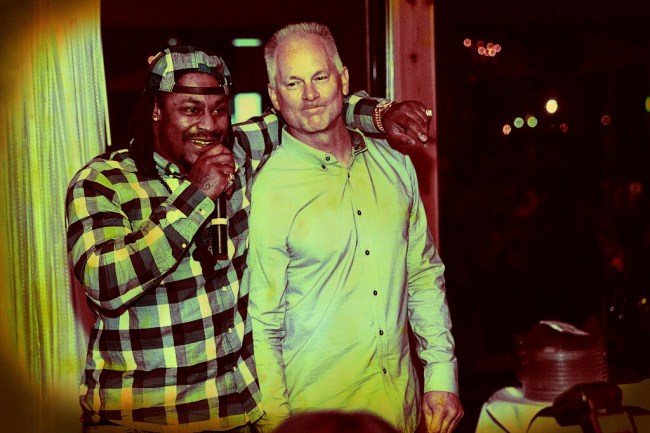 In what may be First-Team Things You Forgot Happened, Marshawn Lynch participated in an Applebee’s sketch in conjunction with (then) ESPN’s Kenny Mayne’s Mayne Event that somehow was not awarded an Oscar.

The Oakland native had just wrapped up a historic season at Cal, but concerns from coaches early in his college career regarding Lynch’s ambition and reluctance to embrace the media led many in Buffalo and beyond to question how he’d transition into the demands of professional football and the temptations that accompany it.

Worried about her son’s image in the spotlight, Lynch’s mother Delisa went as far to ask a Buffalo-area reporter not to judge Marshawn on his appearance, because “They see the gold teeth and the dreads and they automatically think here comes a thug or a bad guy and … and he’s really not.”

Lynch’s less-than-flowery reputation lingered around him like an IPA fart, and while sports media watched from a distance, Kenny Mayne engaged the rookie in a hilarious sketch that endeared Lynch to the people of Buffalo and planted the seeds that would sprout the Skittles-colored rainbow that’s emanated from him since.

We spoke with Mayne on our Endless Hustle about his departure from ESPN after 27 years and how on his final show in May 2021, Lynch thanked Mayne for his courage in helping amplify his best qualities at a time when it wasn’t en vogue.

.@Kenny_Mayne talks about the one time he got choked up during his final @SportsCenter show after 27 iconic years.

The man to stir up the emotion: Marshawn Lynch (@MoneyLynch) 🙏🙏🙏

“The one time I got a little choked up on the show, I can’t remember the words exactly but I was asking him, ‘Isn’t it wrong how people mischaracterized you for so long?’

Because I knew him in a different way from his rookie year, and just know what a warm, funny guy he is. He’s smart, he’s a great teammate. He’s great in the community. He helps with kids in Oakland and Seattle and Special Olympics and homeless people. The list is too long, right?

These other people are writing about him like he’s a jerk because he won’t do stupid conventional interviews. And he said something like, ‘You were helpful in that regard. You said things about me that got people to see me as a good guy.’

That was very touching.”

After his 27-year routine was broken in May after he refused to take a 61 percent pay cut, the 61-year-old has further sharpened his mastery of creating witty spots for the brands he loves.

Mayne recently scored a partnership with the popular fizzy soda company Olipop after he made an offhand comment about the brand on The Dan LeBetard Show. A month later, he wrote and starred in a commercial for the brand that he filmed in his backyard.

5/11/21: @Kenny_Mayne makes an offhand comment on the @LeBatardShow about his love for the fizzy soda Olipop.

Mayne: "F*ck a free case, I wanna make a commercial."

Check out our entire interview with Mayne and Olipop’s Steven Vigilante below.