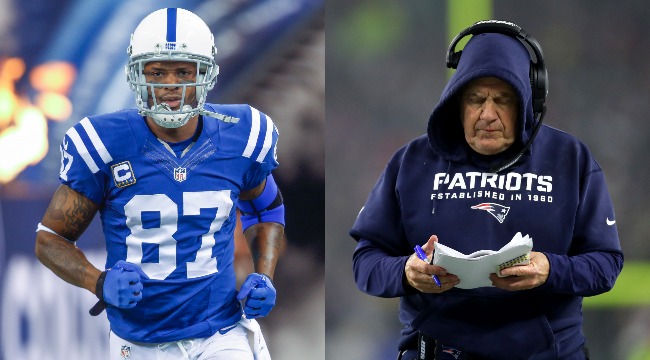 That’s how long receiver Reggie Wayne spent with the Patriots in 2015 before walking away from his soon-to-be Hall of Fame career after 14 seasons.

Wayne—who at 36 years old signed a one-year $2.8 million deal with the Patriots—rejected the rumors that his retirement was fueled by New England’s all work, no play mantra, and claimed his desire to be present for his family outweighed the “dead end” that comes with an aging star’s career.

Reggie Wayne talks about his 11 days w/ Patriots in 2015. Says he missed family, which led to decision to step away. pic.twitter.com/lAqx7o2lFU

Wayne’s 264 hour stint in New England didn’t end without a Bill Belichickism that former teammate Jamie Collins still gets a chuckle out of.

Collins joined our Endless Hustle Podcast presented by Boston Market and recalled how “blown away” the Colts legend was when Bill Belichick played him—a top 10 all-timer in yards and receptions—in a meaningless 12-9 loss to the Giants in the fourth and final preseason game.

Wayne caught two passes for 24 yards in the loss, but who’s counting? Literally no one. But Bill.

Bill Belichick treated soon-to-be Hall of Famer Reggie Wayne like anything but during his 11-day stint with the Patriots in 2015.

"He was blown away."

“I remember when Reggie Wayne came to New England and Bill had him playing in the preseason. It was bad. This man is a beast. And he’s a veteran. He came over there thinking everything was good and Bill had this man playing in the fourth preseason game. He was blown away. We were in the sauna. It was me, him and Brandon Bolden and I was like, ‘Bro you just gotta expect the unexpected. That’s Bill Belichick. You just got here too, Tom Brady doesn’t get special treatments like that either. You gotta prove yourself.'”

Imagine telling a guy with over 14,000 career yards and  82 touchdowns that he needs to prove himself and keeping a straight face.

Meanwhile, as I type this, Bruce Arians is fanning Tom Brady and feeding him fresh strawberries.

Listen to our entire Endless Hustle interview with Jamie Collins below. We discuss:

This episode also contains a conversation with UFC superstar Tyron Woodley, which is sizzling on its own.