Tyron Woodley Reveals Why He’s Come To Respect Joe Rogan After Rocky Past: ‘Money And Women’ 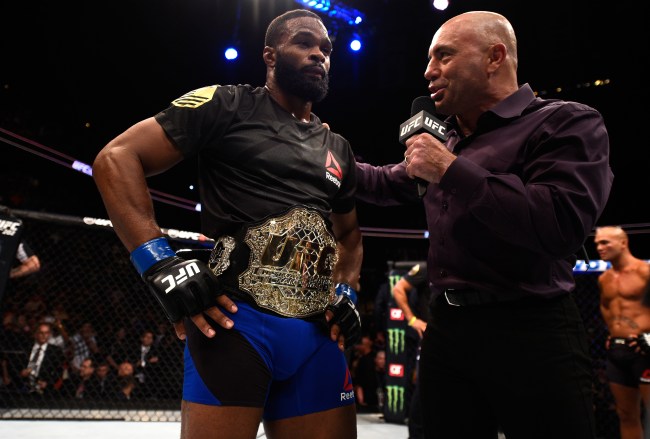 Historically, Tyron Woodley and Joe Rogan have gone together like toothpaste and orange juice, a relationship soured in 2014 after Woodley called out Rogan for his “horrendous” commentary during T-Wood’s UFC 171 TKO victory over Carlos Condit.

Woodley took issue with Rogan’s assessment of him being “gassed” during the win, which was secured in part due to Condit suffering a torn ACL and partially-torn meniscus in the second round.

In the coming years, Woodley would take aim at Rogan for criticism waged against him that he fought defensively in title fights, and in 2018 told Joe to “watch his mouth” after Joe claimed Logan Paul would fare better in the UFC than Woodley’s teammate CM Punk did.

The former welterweight champ has appeared cordially on Rogan’s podcast, but when Woodley joined our Endless Hustle podcast presented by Boston Market, I had to ask him where his relationship with Rogan stood today.

.@twooodley has been critical of @joerogan's UFC commentary in the past, but the former welterweight champ can't help but respect Rogan for the way he handles two things:

“I misunderstood Joe for a while. And I think Joe was such a big fan of mine that he had to make sure he wasn’t biased. And sometimes when you try not to be biased, it sounds like you’re hating on a person. Also I think he saw the potential in me and how I can be in the sport.”

Woodley then revealed that Wiz Khalifa wanted to buy Rogan’s Los Angeles studio after he moved into that soulless monstrosity in Austin, but Rogan decided to keep both studios because he very $ much $ can $.

“I respect him. I respect what he did in the space of podcasting…and you don’t really hear too much about Joe, right? You don’t hear a lot of bullshit. You don’t see a lot of fucking tabloid pictures about him. It gets to the point where you become really good and then you become elite when you’re able to focus and maintain that and hold that and not let the money get in the way. Because with guys it’s money and women. Two things. Money and women. Wars have been started. People have been killed over it. Money and women. I’ve never in my mind saw him outlandishly let the money get to him and I’ve never seen a whole bunch of women with his name in their mouth in a negative way.”

It really is true, though. I can’t imagine there are many people on earth who could work out concepts and ideas live for nine hours a week into the ear holes of millions and manage to not say anything irredeemably despicable. I can’t go a day in BroBible’s Slack chat without saying something like, ‘People who leave shopping carts in parking spaces shouldn’t be able to vote.’

Rogan seems like a guy motivated by principle and a genuine curiosity, with little interest in indulging in the hollow comforts of the rich and famous. And if he isn’t, he deserves a daytime Emmy for faking it.

Of course, this excludes his $14.4 million Texas lakefront mansion, one of the largest transactions in area history.

Check out our entire fascinating interview with Tyron Woodley below. We discuss: