The Russian Slapping Championship Is 1,000x More Brutal Than I Expected But I’ve Got One Major Problem With It 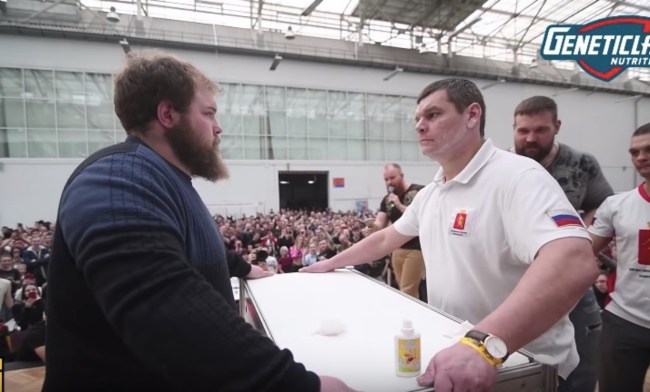 The 2019 Russian Slapping Championship is the combat sport I never knew I needed but am rabidly obsessed with now that I’ve learned about it.

There a short clip that’s been circulating on Twitter but after digging a little bit it turns out there are actually a ton of ridiculous clips of this event where grown ass men, jacked dudes, slap the ever living shit out of each other in pursuit of the 30,000 rubles grand price which equates to only $470 but also a lifetime of glory.

This footage is a lot more intense than I ever expected but I also have one major problem with some of these competitors, specifically with this dude in the blue sweater who won it all. This guy slapped so damn hard that spotters had to stand behind his competitors to catch them after they’d get their lights knocked out.

But this eventual champion in the blue sweater, Vasily Kamotskiy, bothers me. The dude has a thick ass beard on his face. It’s like slapping someone wearing a pillow on their face. It cushions the blow every single time.

I’ll continue to get angry about this guy’s beard below but for now let’s watch this crazy ass 2019 Russian Slapping Championship footage as Vasily Kamotskiy slaps the life out of dudes left and right. There are a few clips here with the last one being the longest, a recap of the event from YouTube. But I’d definitely start with this first Twitter clip if I were you:

Here’s a full event recap of the absolute insanity that is the Russian Slapping Championship:

His beard a wildly unfair advantage and one that the event’s organizers NEED TO ADDRESS before the 2020 Russian Slapping Championship if they want to protect the integrity of their event. But, this is Russia and ‘sports + integrity’ are two words that will never be found in the same sentence.

I’ve already spoken to some industry professionals about this issue (*cough* my coworker who also watched these clips with me *cough*) and they’ve agreed that Vasily has gained an unfair advantage through his thick ass beard. He needs to turn in his belt and resign as the 2019 Championship if he cares about his sport.