A Former Texas LB Says Longhorns Coaches Promised Players $1,000 For Every Pass They Intercepted During The 2010 BCS Championship 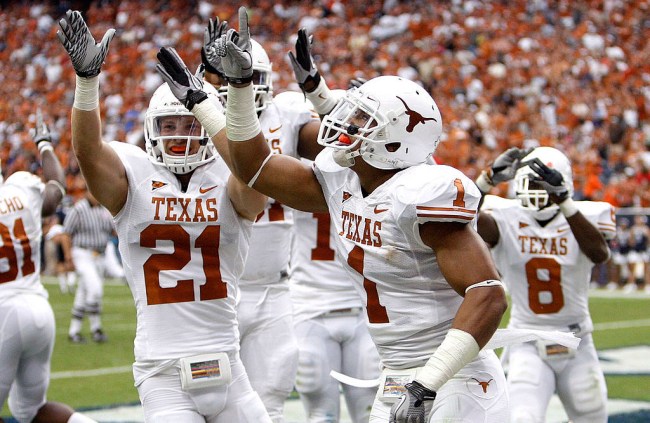 The NCAA’s official mission statement says the main purpose of the organization that rules collegiate athletics with an iron fist is to foster a dignified competitive environment and ensure the “student” in “student-athlete” takes priority over the sports that provide the governing body with a billion dollars in revenue every year.

What it fails to mention, however, is the unspoken mandate to make life as difficult as possible for the athletes who are required to be constantly vigilant in order to avoid suffering the wrath of the NCAA for even the most seemingly insignificant violation of its many rules.

The tides began to turn last year when California passed a law that opened the door for college athletes to finally get paid for their image and likeness, and after spending months bitching and moaning about the legislation, the NCAA exercised some common sense for the first time in its existence and introduced a plan to allow for compensation.

However, there’s no telling how long it’s going to take for new guidelines to be put in place, and as a result, the status quo remains unchanged—a lesson we learned earlier this week when the NCAA got back on its bullshit following the College Football Playoff Championship.

Odell Beckham Jr. was in New Orleans on Monday to watch his alma mater take home the national title by beating Clemson and he joined the LSU team on the field before whipping out an enormous wad of cash and handing out Benjamins to players.

The school initially claimed he was actually distributing fake bills before Joe Burrow blew up everyone’s spot by singing like a bird and saying the cash was genuine, which means LSU is now at the center of an investigation (as is Beckham, who can’t be punished for handing out money but can be arrested for slapping a police officer on the ass).

There have obviously been other college football players who have been compensated in various ways and LSU could have avoided this fiasco if Beckham had remembered the most important rule of committing violations: don’t do it while surrounded by cameras during a national broadcast.

The University of Texas, on the other hand, understands the importance of exercising a bit of tact, as they managed to get away with a major infraction for over a decade until former Longhorns linebacker Emmanuel Acho went into snitch mode on Thursday when he stopped by Get Up to reveal he and his fellow defenders received some motivation ahead of the 2010 BCS National Championship when the coaching staff offered to award $1,000 to a player every time they managed to intercept the ball.

Here’s how things went down via 247 Sports:

“We went to the national championship game in 2009 and … it was public to the team, for every interception the defensive back got, they were going to get $1,000. For every pick y’all got against Alabama in the national championship game, you’re going to get $1,000. Now, the difference is we just didn’t do it publicly on the field.

Blake Gideon quickly cashed in when the fake punt Nick Saban called on the first drive of the game resulted in a Texas pick but no one else was able to capitalize in a contest Alabama eventually won by a score of 37-21.

Maybe they should have sweetened the pot a little more.