Aaron Rodgers Talks About Marshawn Lynch Trade To Green Bay That Fell Through, Wishes The Two Could Have Played Together 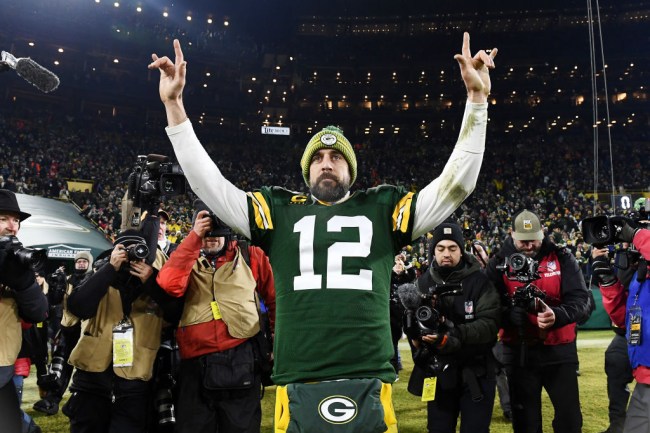 Aaron Rodgers and the Packers held on to beat the Seahawks 28-23 in an NFC Divisional matchup on Sunday night. Following the game, former Cal teammate Marshawn Lynch went into the Packers’ locker room, gave Rodgers a big hug and swapped jerseys with the quarterback, which has become the norm in the NFL these days.

Marshawn Lynch just walked into the #Packers locker room with his jersey. He gave fellow Cal alum Aaron Rodgers a big hug. Rodgers took his jersey from his locker and they just went down a hallway to presumably exchange and share some words.

The Green Bay quarterback had some kind words to say about Beast Mode during his post-game presser. Rodgers even spoke about a possible trade that fell through years back that would have brought Lynch to Green Bay, which he revealed he would have definitely been on board with.

“He is one of my all-time favorite teammates, and I only had to play one year with him,” Rodgers told ESPN. “But he has just an incredible personality and charisma, and he’s just so fun to be around. There was, obviously, conversation years ago about picking him up in a trade that fell through that would’ve been a lot of fun to play some more years together.

But I just have a ton of respect for him in his career. He’s one of those transcendent players that is so likable and so respected by so many people, and I’m just fortunate to have gotten to play with him for a year.”

Rodgers and Lynch were both Golden Bears in 2004 and helped lead Cal to a 10-2 record. Rodgers left for the NFL following what was his junior year while Lynch was just a true freshman that season.

As for the possible trade Rodgers brought up, it turns out the Packers were close to pulling the trigger on a move to get Lynch out of Buffalo back in 2010 in a trade centered around A.J. Hawk. Eventually, the Seahawks came calling and acquired Lynch for 2011 and 2012 NFL Draft picks.