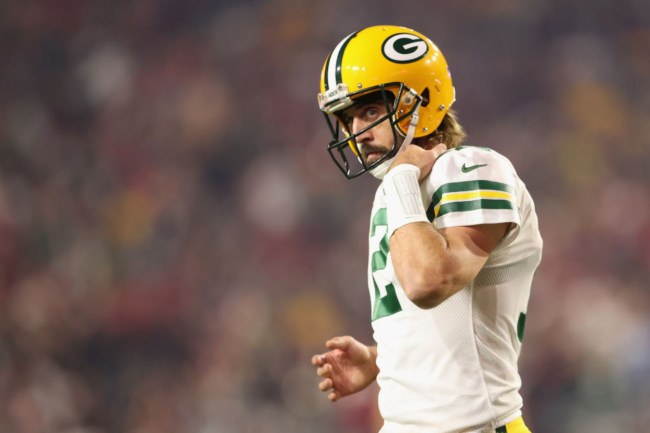 Outside of ‘Jake from State Farm,’ Aaron Rodgers is without question the most well-known person in the State Farm family thanks to the discount double-check. Having said that, many have been curious as to what the insurance company may decide to do with Rodgers given the hot water he currently finds himself in regarding the vaccine.

State Farm released a statement about Rodgers’ situation and it appears it’ll be sticking with the Green Bay quarterback.

The news of Rodgers not being vaccinated caught the sports world off guard seeing as how he told the world he had been “immunized” during the offseason. On Friday, Rodgers then appeared on ‘The Pat McAfee Show’ to address the situation head-on and tell his side of the story.

Rodgers made it a point to let everyone know that he didn’t lie and that it was his plan all along to use the phrase “immunized.” Given that there wasn’t a follow-up question, he went about his business.

“Had there been a follow-up to my statement that I’ve been immunized, I would have responded with this: I would have said, ‘Look, I’m not some sort of anti-vax, flat-Earther. I am somebody who’s a critical thinker,'” Rodgers said in part.

A day after the interview, healthcare company Prevea Health announced they were terminating their partnership with Rodgers. People on social media were simultaneously and constantly tweeting at State Farm and asking what they were going to do.

At this time, it doesn’t sound like State Farm has plans to terminate things with Rodgers.

“Aaron Rodgers has been a great ambassador for our company for much of the past decade,” a company spokeswoman said in a statement to USA TODAY Sports.

“We don’t support some of the statements that he has made, but we respect his right to have his own personal point of view. We recognize our customers, employees, agents and brand ambassadors come from all walks of life, with differing viewpoints on many issues. Our mission at State Farm is to support safer, stronger communities. To that end, we encourage vaccinations, but respect everyone’s right to make a choice based on their personal circumstances.”

Interestingly enough, data from Apex Marketing shows that Rodgers appeared in just 1.5% of all State Farm commercials on Sunday. This is noteworthy given that Rodgers reportedly gets featured in about 25% of the company’s commercials.

I for one, will wait for the scientific views of Jake From State Farm.

In Very disappointed in @StateFarm. I will reconsider my 25 year relationship with you as my insurance company.

So State Farm would be cool with it’s customers “misleading” them when filing a claim.