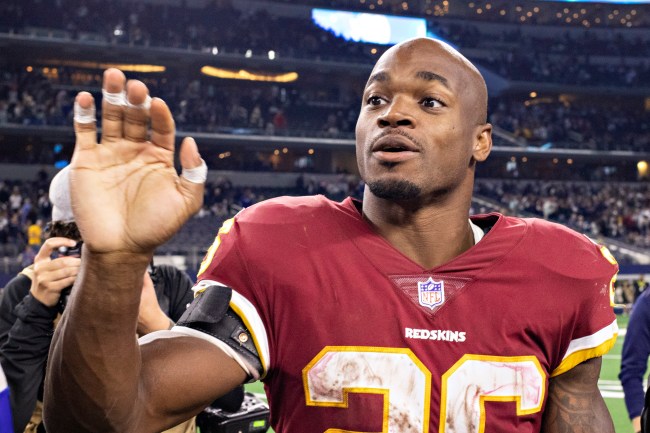 For every story about a professional athlete being fiscally responsible with his career earnings, there seems to be two stories about athletes pissing it all away. For every Glover Quin, there are two Adrian Petersons.

The Washington Redskins running back has earned just shy of $100 million during his 12-year career, the most of any running back in NFL history. Now, the 7-time Pro Bowler is being taken to court after defaulting on a $5.2 million loan.

Peterson’s lawyer released a statement claiming that his client’s financial woes were propelled by “yet another situation of an athlete trusting the wrong people and being taken advantage of by those he trusted.”

Well, most of it.

Details of the outlandish birthday party Adrian Peterson threw himself for his 30th birthday party in 2015 are beginning to make the rounds again, and given the recent news of financial unraveling, it’s a lot harder to read this time around.

As ESPN reported in 2015, Peterson made a list of about 320 friends and family members, sent out invitations with an embossed signature logo, bought his guests first-class plane tickets to Houston and booked them first-class hotel rooms to attend his birthday bash.

Peterson contacted Crystal Sowah, the CEO of the event company that planned his wedding, that he “wanted to throw one of the most memorable private parties in the history of Houston.”

Peterson was on a mission to create an “Arabian wonderland in the backyard of his Houston mansion.”

Narrative out of Adrian Peterson’s camp is that he’s broke because of bad apples who took his $. He chose them. He also spent millions on his 30th birthday party that featured a camel, snake charmers, belly dancers and first class travel 300 guests. pic.twitter.com/dhmH2MZSMM

They found a lemur available for rent and a python that would drape like a scarf over Peterson’s shoulders. They imported a troupe of snake charmers out of Dallas and world-renowned belly dancers from New York. There was an elaborate tent city in Peterson’s backyard: Moroccan couches, velvet drapes, ice sculptures bearing Peterson’s initials, imported trees and a throne on which Peterson alone would be allowed to sit. The cake designer baked a royal palace flanked by a fondant camel and elephant. Wale agreed to perform. Jamie Foxx offered his services as a DJ. In the final hours before the party, more than 100 workers rushed to set up stripper poles, a hookah bar and a cigar humidor in a tent called the Man Cave.

“Even the port-a-potties were over the top, with silver sinks and shiny floors,” says Bobby Maze, one of Peterson’s closest friends. “You would have thought you were going to the bathroom at Ruth’s Chris.”

Peterson entered by a path from the front door of his house toward the main tent. Another parade formed in front of him to lead the way: first the fire-breathers, then the sword swallowers, then the snake charmers and the belly dancers and then finally a camel, rented for the night from an Austin zoo. By the camel’s side were three men dressed as humble peasants, their eyes glued to the floor, and atop the camel was one man, Peterson, wearing a bejeweled Arabian headdress and a gold sequined jacket.

@iamjamiefoxx showed up and poured up!!! That was real to be at @AdrianPeterson party! #TexasWays pic.twitter.com/RVb0GC59Ls

You would think that after a grand jury indictment on a charge that he abused his 4-year-old son, followed by another allegation of the same nature, admitting to smoking weed and sleeping around (7 kids, 6 women), and being suspended for most of the season prior (2014) as well as mandated counseling sessions, one of his “friends” or advisers would tell him that throwing a cartoonish birthday party for yourself is nothing more than a revelation of delusion.

But, no one who was supposed to cared enough about Adrian Peterson the person. I can all but guarantee all those people disappeared when shit hit the fan.