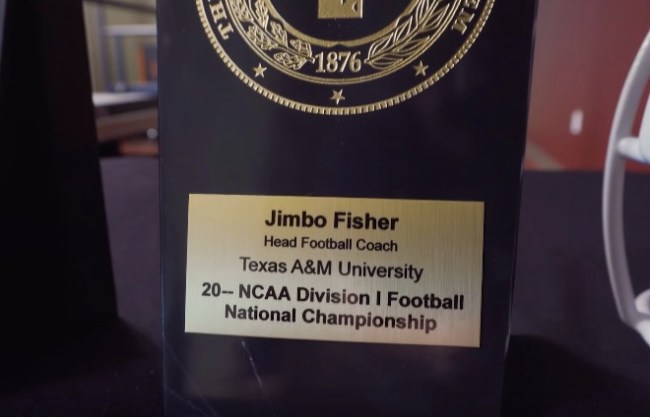 The Aggies have officially drunk the Jimbo Fisher Kool-Aid and they don’t care who knows it. When Texa A&M lured football coach Jimbo Fisher away from Florida State in the offseason many in College Station were already ready to hang the National Championship banners before Jimbo had even stepped foot on campus. Then, Jimbo pulled in the 17th ranked recruiting class (FSU came in at #11) and the hype train was barrelling forward with no way to stop it.

This story wouldn’t have been such a big deal if the Aggies didn’t release video of the event but they did exactly that. Now, Twitter’s been roasting the ever living shit out of the Aggies for getting way ahead of themselves:

After this video made its way to Reddit the Aggies started getting torched on Twitter for this buffoonery:

UCF just claimed a national championship for whatever year Jimbo Fisher gets to inscribe on his dateless national title trophy at Texas A&M.

Jeremy Pruitt is more likely to win a National Championship at Tennessee than Jimbo Fisher at Texas A&M..

I'm surprised that nobody got their hands on the letter that Jimbo Fisher received shortly after receiving his undated National Championship Plaque… pic.twitter.com/CTQhXzg7As

Jimbo Fisher III finally pulls it out in 2099.

Don't be too mad at @AggieFootball for claiming @FSUFootball success as their own, if the last time you won a National Championship was when #BobbyBowden was 9 years old you'd be starved too….. #DoSomething #JimboFisher #Noles #Aggies #NoleNation

Going to be super awkward when a 135 year old Jimbo Fisher finally wins the 2100 Natty and they have to redo the plaque https://t.co/qhFnpjXVxk

I could keep pulling tweets but what’s the point? You get it. Jimbo Fisher and the Aggies are getting roasted for celebrating a National Championship the year after Jimbo’s team was barely bowl eligible.