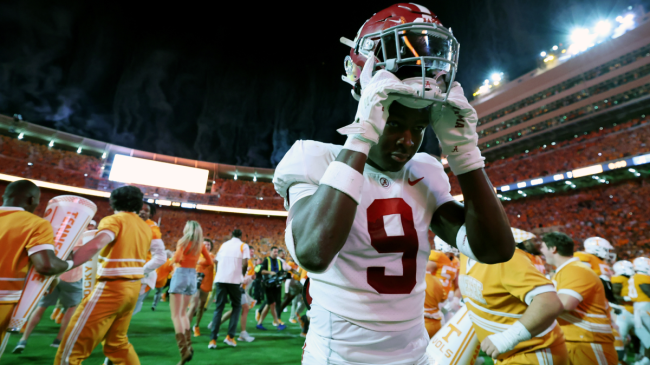 The Alabama football team is not used to losing in the Nick Saban era. Particularly to archrival Tennessee.

In fact, up until Saturday, it had never happened. Saban’s Tide were a perfect 15-0 against the Vols, a streak dating back to the 2007 season.

But this past weekend, that streak ended.

It was the Vols lighting up the cigars in Neyland Stadium to celebrate a rivalry win, not the Tide. Tennessee’s offense put on an absolute show against a typically stout Alabama defense. That unit put up 52 points and nearly 600 yards on its way to an exciting three-point win.

Despite the offensive dominance and jumping out to an early three-score lead, the game came down to the final play. Tied at 49-49 late in the fourth quarter, the Vols trotted out kicker Chase McGrath for some game-ending heroics.

The kicker converted his attempt, though it appears it was tipped by an Alabama player. Many are speculating that the tip actually aided the kick in going through the uprights.

Either way, Tennessee left with a massive upset, introducing itself as a College Football Playoff contender.

Alabama fans, on the other hand, were sent home with a loss. They’ve been quick to blame referees for the defeat rather than the team, calling out officials for missing key penalties. But the most recent excuse takes the cake.

Alabama fans are now saying the refs were celebrating Tennessee touchdowns, claiming that the officiating crews wanted to see the Tide fall.

There have been a number of Crimson Tide social media accounts posting a video of the Vols’ first quarter score to put the team up 21-7.

Is this official celebrating a Tennessee touchdown call, or is it just his mannerisms?

Went back & watched the game, & this just stood out to me as being a little strange. He could have been excited that his officiating team got it correctly.

Anybody else find this to be odd? pic.twitter.com/oriFdDsR9U

The referee gives his touchdown signal after a review of the play before balling his hands into a fist as he lowers his arms. Alabama fans, picking at straws, are now saying the official was pumping his fists in celebration.

Now, I will say, the officiating looked bad on both sides. It’s never good when the crew loses count of what down it is.

Personally, I didn’t see much on the pass interference call that took away a Crimson Tide interception, but the same is true for the PI that extended a Bama TD drive in the third quarter.

Calls were bad both ways, not just for Alabama, but the refs didn’t allow 600 yards to the Tennessee offense or miss a go-ahead field goal in the fourth quarter. And they certainly weren’t celebrating Vols touchdowns.

It’s okay Bama fans, it will get better from here.