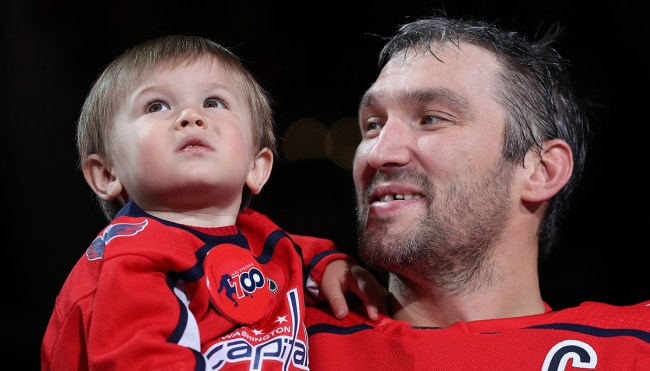 Most sports leagues are home to at least a few players who were able to hone their skills with the help of a mentor who is arguably more equipped to help them get there than anyone else: a famous father who was also a pro athlete.

That includes the NHL, which is currently home to a number of guys who are carrying on their family’s legacy, including Max Domi, Brendan Lemieux, Zach Parise, and Marcus and Nick Foligno.

In many cases, children of former players have some fairly lofty expectations to live up to when it comes to escaping their parent’s shadow. However, it’s hard to think of many people who would face a bigger uphill battle than Sergei Ovechkin based on what Alex has managed to accomplish over the course of his 17 seasons in the NHL.

Now, you could argue it’s pointless to even start speculating on Sergei’s future when you consider he’s currently three years old. With that said, it’s hard to think of anyone who’s theoretically eligible for the 2036 draft class who’s managed to drum up more hype in such a short time on the planet.

It only took Sergei a couple of years to figure out how to juggle a puck, and he’s only continued to improve since then.

SERGEI OVECHKIN IS ONLY TWO YEARS OLD AND HE IS ALREADY JUGGLING THE PUCK AHHHHHH pic.twitter.com/IZKCmJHvqA

Now, we’ve been treated to our latest look at his ongoing development, and it’s safe to say Sergei (who will celebrate his fourth birthday later this month) will only see his stock improve thanks to a video of him ripping clappers from the point while Alex looks on.

If anyone knows of a sportsbook currently fielding bets for the top overall pick at the draft in 14 years, feel free to let me know.