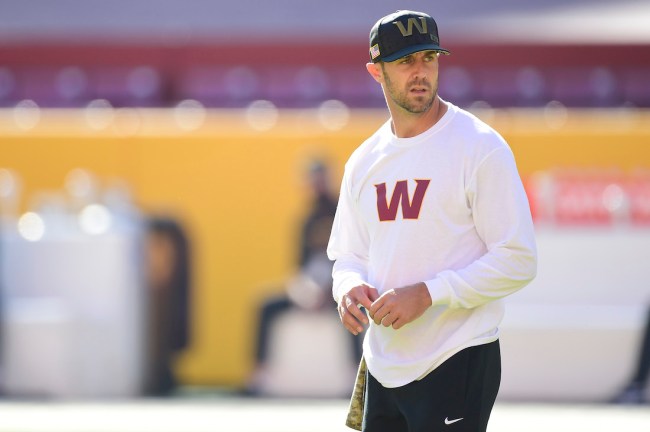 What Alex Smith accomplished last season is nothing short of remarkable. Anybody who saw the grizzly leg injury that the former No. 1 overall pick sustained during a 2018 game against the Houston Texans probably assumed the quarterback would never play again. Hell, after infection got in his bloodstream, Smith nearly needed the leg amputated, so he was lucky just to walk again.

But the signal-caller persevered and defied the odds, not only returning to play again in the NFL, but leading the Washington Football Team to the NFL Playoffs by winning a depleted NFC East division. Making it all more meaningful? Alex Smith was named the league’s Comeback Player of the Year, which rewarded him for refusing to give up in the face of adversity.

Here’s the thing, though, it all may have never been.

During an interview with GQ, Smith said that his comeback wasn’t necessarily expected by the Washington Football Team, and that his return “threw a wrench” into the team’s plans. Considering how bad the leg injury was, it shouldn’t come as a surprise that the franchise was shocked with his progress and eventual comeback. But the quarterback added a little nugget that really makes you scratch your head: That he felt like the organization didn’t even want him on the team last season after his return, and that he needed to convince them to keep him on the active roster.

“I mean, they tried to put me on PUP [Physically Unable to Perform] for two weeks, then they tried to IR me. I felt like I still hadn’t had my fair shake at that point. I wanted to see if I could play quarterback and play football, and I feel like I hadn’t been given that opportunity yet to find that out. It’s like getting this close to the end line of a marathon and they’re telling you that you can’t finish the race. It’s like, fuck that. I’m finishing this thing. At least I’m going to see if I can. So, I’m thankful we worked through all that stuff but no, it wasn’t like open arms coming back after two years.”

Now, look, as mentioned above, nobody could’ve imagined that Alex Smith was going to return to the NFL. After sustaining the compound fracture and undergoing numerous surgeries, the quarterback himself described the current state of his leg as a “skin quilt” to Men’s Health a few months ago, so the Washington Football Team shouldn’t be completely looked down on for initially being surprised that he was returning.

“Basically, it’s like a skin quilt,” Smith says of his leg now. “When they took my quad from my left leg to cover the bone in my right, they took skin with it, so in the middle of my shin I have a chunk of skin from my left thigh and, around that, a patchwork of skin grafts. And there are definitely some crevices where it just doesn’t all line up perfectly.”

However, once Smith returned and proved he was healthy enough to play, the fact that he felt alienated by the team is a bad look for the franchise. Sure, the quarterback didn’t exactly tear it up during his six starts — finishing with just 1,582 yards, 6 TD, 8 INT — but he guided the Washington Football Team to a 5-1 finish down the stretch by playing smart football, even if he was limited physically. Whether it was a new coaching staff or not, they shouldn’t have immediately passed judgement.

Luckily, Alex Smith got his second chance and ended up winning NFL Comeback Player of the Year, shocking everyone and proving he’s still more than capable of playing in the league. With his time in D.C. most likely over, he mentioned to GQ that he’s “got more left” and is working on getting stronger for the 2020 season. He’s easy to root for, so here’s to hoping he gets another opportunity somewhere that appreciates him.