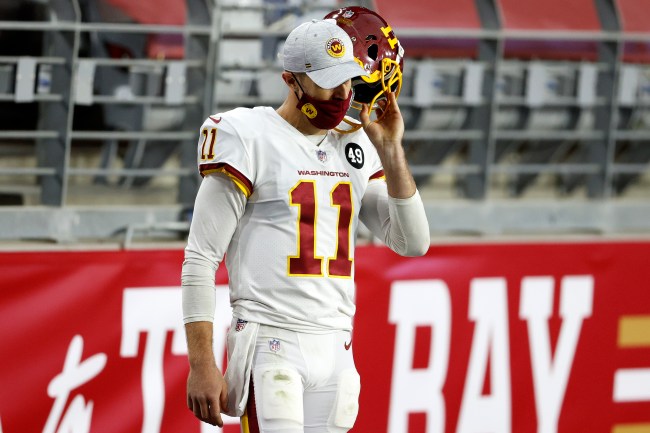 When Alex Smith went down with a devastating leg injury against the Houston Texans back during the 2018 NFL season, nobody could’ve predicted what was about to occur. Injuries happen all the time in sports, but the days and months that followed after Smith’s were some of the scariest an athlete has ever had to endure — but, miraculously, he bounced back and is starting a game for the Washington Football Team in the NFL Playoffs.

For those who don’t know the entire story, ESPN wrote a piece in 2020 detailing all that the former No. 1 overall pick had to endure. Alex Smith didn’t just tear a few ligaments or break a bone, he absolutely shredded his right leg byway of a compound fracture, so much so that he nearly needed it amputated after an infection got in his bloodstream. Doctors weren’t sure he’d ever walk again, let alone play football.

The doctors finally walk in, and they look defeated. Like they had opened Pandora’s box. “He has a bad infection,” they say. “There was colonization of the bacteria all through his soft tissue. We removed a big portion of the anterior compartment.”

“What does this mean?”

“Well, we had to take off a lot of skin, a lot of muscle tissue.”

“So, is it fine? Is it done? Is the infection gone?

“No. We have to go back tomorrow. And we’re going to do it again. We think this looks like necrotizing fasciitis.”

The entire comeback is… well, words can’t do it justice. It’s nearly unbelievable. It’s incredible. It’s inspiring. It’s something most of us could never even fathom. Yet it’s something Alex Smith has successfully accomplished — even with some roadblocks along the way.

While talking about the injury and his comeback with Men’s Health, Alex Smith didn’t beat around the bush when describing the current state of his right leg. In. fact, it’s a disgusting visual, and only proves how remarkable the quarterback is to be walking and/or playing football again.

“Basically, it’s like a skin quilt,” Smith says of his leg now. “When they took my quad from my left leg to cover the bone in my right, they took skin with it, so in the middle of my shin I have a chunk of skin from my left thigh and, around that, a patchwork of skin grafts. And there are definitely some crevices where it just doesn’t all line up perfectly.”

What on earth? Just hearing Smith describe his own leg this way makes me cringe. Imagine looking at a part of your body and being able to see something this messed up. How wouldn’t fear just race through your mind? How couldn’t you feel down in the dumps? How about all that self-pity that could creep in and wonder why this happened to you? Not Alex Smith, though, because here he is getting set to lead his teammates in a postseason game after sneaking in through the back door by winning a putrid NFC East.

Sure, the Washington Football Team only won seven games and don’t deserve to host a game in the NFL Playoffs. But given what Alex Smith has endured to come all the way back from this gnarly leg injury, it’s easy to root for the team and hope that, somehow, the quarterback can bottle up whatever he did to heal and help his team make a deep postseason run. That’d only be the cherry on top of this all.