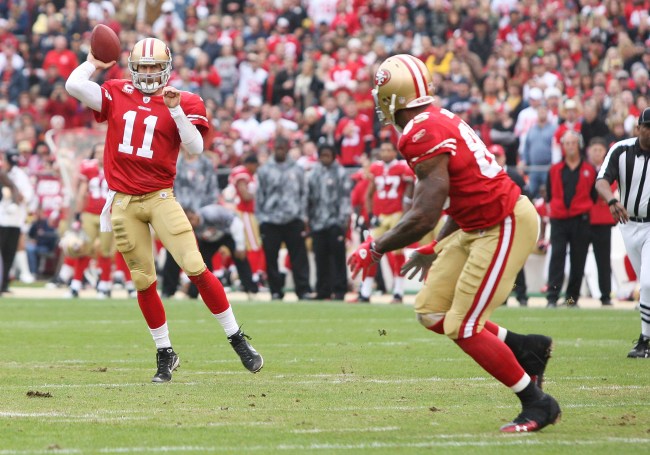 Alex Smith and Vernon Davis will forever be bonded in San Francisco 49ers folklore after connecting on a game-winning completion with nine seconds left to beat the Saints in the 2011 NFC Divisional Round playoffs.

The play will forever be known as The Catch III and capped off a heroic seven catch, 180 yard, two touchdown performance from Davis that brought the man to legitimate tears.

The 36-year-old Davis retired earlier this year after claiming to lose the mental bandwidth to go at another NFL season full steam.

Smith, on the other hand, is still competing in the league despite being less than two years removed from a “warlike” leg injury that quite literally nearly killed him.

WARNING: The following image is not for the easily queasy.

Earlier this month, Smith was sacked SIX times in his first game back since November 18, 2018 in a blowout loss at the hands of the Los Angeles Rams. Not exactly the fairy tale return he was hoping for, and former teammate Vernon Davis isn’t convinced the upside outweighs the potential downside from returning after such a catastrophic injury.

Davis joined our Endless Hustle Podcast and revealed his fear and irreverence for his former quarterback.

Who's ready for Episode 5 tomorrow?! Here’s a sneak peak of @vernondavis85 discussing Alex Smith’s brave return to the football field.

“I am very afraid for him.

Especially when I heard he was coming back because I would walk into that locker room every morning and see him on that table, and I saw in person what they did to his leg. They took a skin graft, took skin off his thigh and put it on his leg and his leg looked like it was inflated at the bottom. It was really scary to watch.

But to see him back out there it doesn’t surprise me because he’s so resilient.

I watched him when he was with the 49ers from being benched to coming back and then being traded and going to Kansas City and being at the top of his game over there.

That guy is relentless. He’s everything we should strive to be like. That’s what Alex Smith stands for.”

You can listen to our entire interview with Vernon Davis below: