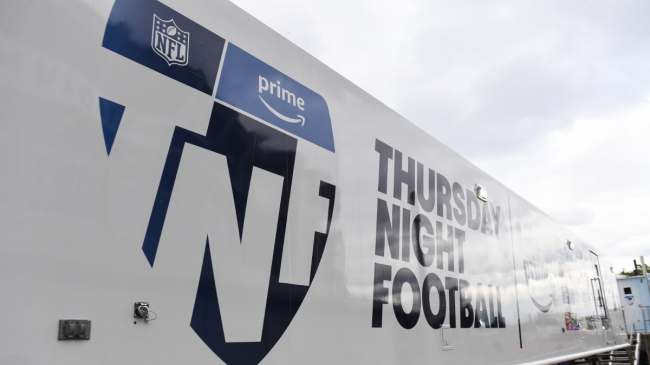 Amazon Prime is making headlines with another major sports announcement. The streaming service plans to air an NFL game on Black Friday of 2023 with a 3 PM ET start.

It would represent the first ever NFL matchup played on the day after Thanksgiving, though the opponents in the meeting have not yet been announced.

This is Amazon Prime’s first season as the exclusive carrier of Thursday Night Football and getting in on the Black Friday action shows it’s willing to expand in its partnership with the league.

Typically, Black Friday is reserved for shopping. Most Americans take advantage of discounted items at major outlets as they look to get wrap up Christmas purchases early. It makes sense for Amazon, the largest online retailer in the world, to jump in on the action.

And by airing the unprecedented NFL contest on their service, they can not only attempt to keep folks home during the Black Friday afternoon, but they can also market their services directly to viewers. Theoretically, one could tune into the game, see an ad, hit the Amazon app on their phone, checkout, and be back before missing any of the action. All without leaving the couch.

There will be competition for viewers, as college football has been king on Black Fridays of past.

That means finding a matchup that will attract eyes, which hasn’t been a strength of Amazon’s Thursday Night Football action thus far. Fans have been blasting TNF games this year. The last two weeks, in particular, have been epically bad.

There have been two touchdowns scored on the field over the last two Thursdays. The Colts and Broncos failed to reach the endzone in a 12-9 overtime snoozer. The Bears and Commanders followed that up with a pitiful 12-7 primetime product last week.

Keeping the Black Friday theme of discounted items, fans are now debating which bargain game they’ll have to watch in the Amazon Prime headliner.

Fans have been quick to react in preparation for another Amazon Prime NFL airing. Many have been asking to be reimbursed for the retina-burning boredom that’s been shown this season.

Now, they’ve turned their attention to 2023. Take a look.

Amazon forcing us to buy $3000 worth of Christmas gifts while simultaneously watching the worst matchup in NFL history on Black Friday next year pic.twitter.com/7aGDU66Vxs

Fans are already imagining the worst possible matchup to be scheduled for the Black Friday slot. The Denver Broncos, who’ve been absolutely abysmal in primetime games this year, were a popular target.

The NFL is trying to figure out how to schedule a Broncos-Broncos matchup for this marquee time slot. https://t.co/wjSefFRqnX

There were a few other suggestions that didn’t include Denver.

Hopefully for Amazon, the NFL action will be better than what we’ve seen on the service so far in 2022.

The NFL when that game score is 3-3 in the 3rd quarter https://t.co/9vDO0kcGXO pic.twitter.com/Iht4fUm4K5

If not, you can bet that football fans will be tuning into those college rivalries as opposed to torturing themselves with another discount matchup.