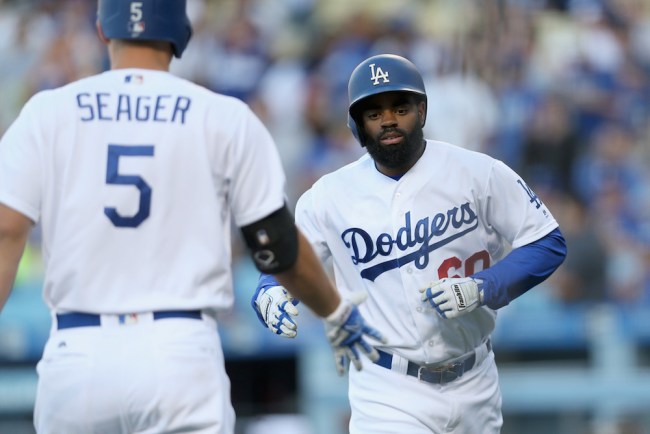 The sad story of former Los Angeles Dodgers outfielder Andrew Toles took an unfortunate turn this week after Toles was found asleep behind a Florida airport.

Toles was arrested and jailed when he refused requests to leave.

According to the Miami Herald, Toles was found asleep behind the Key West airport with nothing but a black book bag. On his arrest report, police listed his address as “the streets of Key West.”

Police said they gave Toles several chances to leave the area without being arrested but he wouldn’t walk away, wrote Deputy Tomas Venegas.

On Friday, Toles remained at the Stock Island Detention Center on a $500 bond.

He has a court date set for July 2 before County Judge Peary Fowler.

Toles, 28, has publicly battled with the demons of depression and anxiety.

Toles played for the Dodgers as recently as 2018 and is currently on the restricted list. He failed to report to spring training in 2019 for an unspecified personal issue.

According to a profile from The Athletic that year, Toles then spent time in a mental health treatment center.

In the 2016 playoffs, Toles hit .364 and scored six runs for the Dodgers. But he missed most of 2017 due to a torn ACL. A feature story that year by NBC Los Angeles chronicled Toles’ professional life and struggles at the time.

Fans took to Twitter to implore the Dodgers to reach out and help the former fan favorite.

Andrew Toles tore his ACL trying to save a Julio Urias no hitter in 2017. I know some people don’t want to be helped and I obviously don’t know everything involved here but the Dodgers need to OFFER him THE WORLD in terms of support. Give him a job, an apartment and counseling.

My thoughts are definitely with Andrew Toles right now. Not my place to tell him what he needs but sounds like he could use support, whether it be emotional, financial, or such. Hoping the Dodgers & baseball community can reach out. No one should have to battle things alone. pic.twitter.com/kyksZqH1mF

The way I want ro remember our pal Andrew Toles, a very kind and cordial man. Hung out and signed about 12 other people's stuff.
This was Ryu's last assignment in Reno before getting back to the regular rotation after a groin injury. pic.twitter.com/vkQjjaBMxC

Today is as good a day as any to say I love Andrew Toles and I really miss the guy.