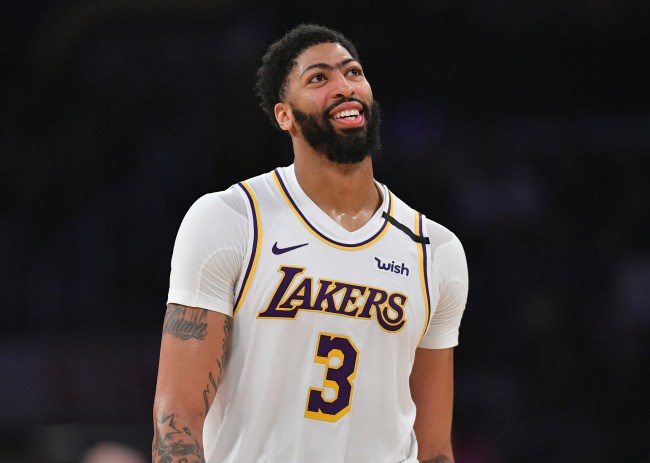 Anthony Davis is from the South Side of Chicago, which is right in the heart of Chicago Bears country. Considering the Bears’ oldest rival is the Green Bay Packers, it’s safe to say the All-Star big man would probably do anything he could to throw shade at the Pack, right? Well… if Davis’ jersey choice during the Seattle Seahawks-Green Bay Packers NFL playoff game is any indication, you’d be way wrong.

That’s because Davis showed up at Lambeau Field sporting an Aaron Rodgers jersey, handing out high fives to Green Bay fans as he emerged from the tunnel and onto the frozen tundra. Just take a look below — which was tweeted by the Packers’ official account.

“Let’s get this win.”@AntDavis23 is ready for playoff football at Lambeau Field! #SEAvsGB | #GoPackGo pic.twitter.com/HeQ3HcxoU5

Is this blasphemous to anybody else? Indeed it was, because Twitter had an absolute slam fest on Anthony Davis after cameras got the Lakers star grinning from ear to ear wearing No. 12 of the hated Pack. Just look at the reactions on social media below.

Sincerely,
All of Chicago https://t.co/JNys2VgH9b

Anthony Davis is from Chicago. Why is he rocking a Packers jersey?? 🤮 #RespectLost

To say Chicago is disappointed is an understatement @AntDavis23 https://t.co/a62G2uOnNQ

How is this dude a Packers fan??? He’s from CHICAGO..

I should have known you were built like that @AntDavis23 🤡 pic.twitter.com/3tX7BmYG5V

Now, had Anthony Davis worn the Rodgers jersey in the comfort of his own home with nobody knowing, it’d still be pretty bad — but not a public uproar. Hell, if the six-time NBA All-Star even wore the Packers jersey at home and was photographed in it for social media, people still probably wouldn’t be as pissed. But to have the audacity to rep the jersey of, arguably, Bears’ fans most-hated man in the NFL while in enemy territory is downright disrespectful; hence the public lashing out.

With Anthony Davis already turning down a contract extension from the Lakers — meaning he’ll be a free agent this upcoming offseason — should we read into the fact that the superstar was hanging out in Green Bay of all places, which isn’t too far from Milwaukee; where the reigning league MVP, Giannis Antetokounmpo resides? Probably not, but, damn, that’d be something else, wouldn’t it?

Bottom line is this: Intentional or not, Davis trolled his entire hometown by showing up to the Seahawks-Packers game in an Aaron Rodgers jersey, and he deserved the fallout from people who crapped all over him for doing so. C’mon, man, you’ve got to think before pulling such a bold move.