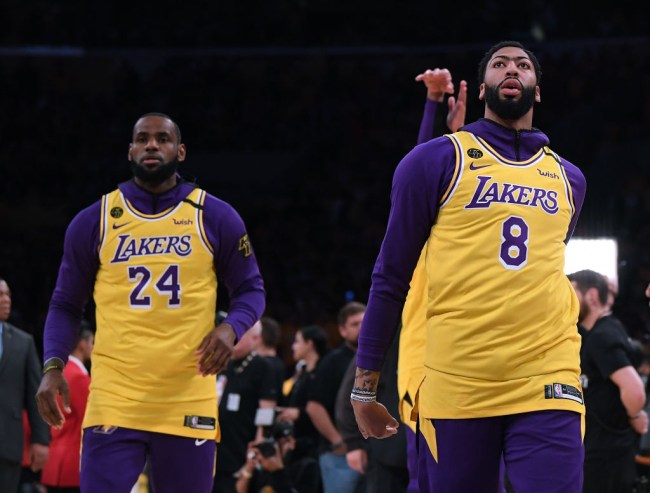 The Lakers were in the air on their way to Los Angeles from Philadelphia when the news broke that Kobe Bryant, his daughter Gianna and seven other people passed away in a helicopter crash on January 26.

The tragic news shook the lives of millions of people in every corner of the globe and for the Lakers team stuck on a plane cruising at 38,000 feet it presented an extremely difficult and unique situation. On the one hand, you had players and staff finding out about the news together, seemingly at the same time and having teammates to lean on during such a terrible moment, but on the other hand, that certainly doesn’t help the sting of just how tragic the news was.

Anthony Davis talked to ESPN about the scene on the plane when he found out about the helicopter crash. He can’t sleep on flights so he was watching something on his iPad when Dwight Howard waved to him telling him the news.

Davis described that his first reaction was ‘Kobe who?’ not thinking at all that Howard could possibly be talking about Kobe Bryant, that simply couldn’t be true, but it was. The Lakers’ big man was also sitting next to LeBron James on the flight, who was sleeping, and he was the one that had to nudge James awake and deliver the news.

When Davis next glanced away from his screen, his eyes focused on Dwight Howard and DeMarcus Cousins, waving their hands in his direction, their urgency muted by Davis’ noise-canceling headphones.

“So I remove one of my headphones, and I look,” Davis says. “And Dwight tells me, ‘Man, Kobe died.’ And me thinking as invincible as Kobe Bryant is, I’m like, ‘Kobe who?’ Because I’m like, that’s not — it’s not Kobe Bryant.

“I remember the first thing Bron said to me was, ‘Man, y’all stop playin — like, stop playing with me,'” Davis says. “And I’m trying to get on the internet. And Dwight, like, you can see him start crying. He was like, ‘It’s true.'”

“Everybody was crying,” Davis says. “It was just like something that we didn’t believe, something that was shocking to all of us. Because Kobe, he’s touched so many, you know — players on this team, staff members. You know, Judy [Seto], his trainer; Rob [Pelinka, his] agent; Robert Lara, security. He touched so many people.”

Just like plenty of people all around the world, the first reaction among people on the plane was that the report had to be false, but as time passed it, unfortunately, became a reality.

James and Anthony Davis paid tribute to Kobe Bryant by getting tattoos on their legs as the entire organization tries to move on from the tragedy and win a championship in honor of the Black Mamba.