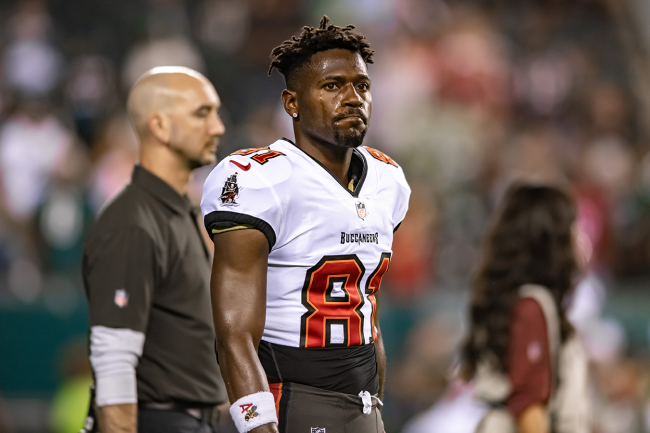 Antonio Brown’s former chef is making another shocking claim, just days after accusing his client of obtaining a fake COVID-19 vaccination card. Steven Ruiz, the former live-in chef who also took on the role of a personal assistant, says that Brown’s fake card came from a teammate.

Ruiz claims that he was asked by Brown’s girlfriend, Cydney Moreau, how to go about obtaining a fake card for each of them. Obtaining a COVID-19 immunization card would allow Brown to bypass NFL protocol.

Ruiz said that he would look into but never obtained the card. Not only is a false card a violation of NFL personal conduct policy, but it is a federal crime.

In response to the allegations, Brown and his camp offered a definitive statement that he is vaccinated. They also said that he would be willing to get the COVID-19 booster shot live on TV, if necessary.

When asked about the rumors, Tampa Bay head coach Bruce Arians was quick to move on. He said that the team had done its due diligence and that he had no reason to believe the reports.

Meanwhile, Ruiz doubled down. He told ESPN that Brown received the fake vaccine card from a teammate, but declined to name the player.

Here is what Ruiz said about where Brown obtained his alleged fake card:

“He got them from another player who was selling them,” said Ruiz. “That player came over to the house multiple times. He had to get another copy of Cyd’s vaccine card because they got her birthday wrong on the first one.”

“I’m gonna sit on it for a little while,” Ruiz said. “The truth will eventually come out. If this does become a bigger and deeper investigation to follow the NFL — just to get into legal terms — this will all come to light.”

Moreau, Brown’s girlfriend, also denied the accusation. She even went so far as to say that she does not know Ruiz.