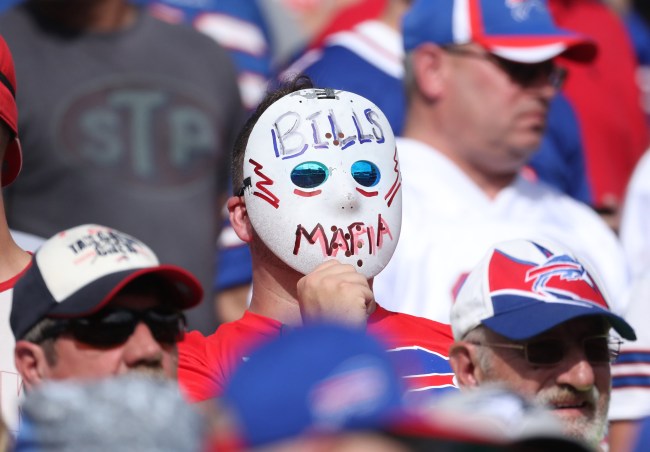 Antonio Brown was reportedly about to be a member of the Buffalo Bills until, well, he wasn’t. Following reports from NFL Network’s Ian Rapoport late last night, the football world was shocked to hear that the All-Pro wide receiver was getting shipped off to Buffalo, which is basically known for being the NFL’s version of Siberia. The news was so extreme that Brown himself even called the report “Fake News” in response on Instagram.

Eventually, the entire mess got cleaned up and other football experts, specifically ESPN’s Adam Schefter, put the Antonio Brown to the Bills talk to rest. While the Pittsburgh Steelers and Buffalo Bills did engage in talks for Brown, it was reported that the prima donna wide receiver wasn’t even going to report to the Bills had he been traded there, which, just a hunch, probably had an impact on the deal going through.

Brown was unwilling to go to Buffalo, period. Wasnt even a matter of money at that point. So the deal fell through. Steelers and Bills had stopped talking and both sides had moved on. Market for Brown is pretty bleak right now

With all this drama playing out through social media, it left plenty of people mocking the Buffalo Bills and the entire city of Buffalo, with plenty of jokes coming in from people on Twitter who were making fun of Antonio Brown, reportedly, being a Buffalo Bill. Oh, but that’s where the fun really begins, because those proud members of Bills Mafia stepped up to the plate and defended their team and city against all those making fun of it. Take a look at some of the tweets below, which were really aimed at Antonio Brown.

Meh, tbh I think we have successfully dodged a bullet by not signing Antonio Brown. I'd rather have a team of people who love the game and respect their teammates #gobills #billsmafia

For the record, I'm thrilled AB won't be coming to Buffalo. He's an egotistical baby and his blonde mustache makes me physically I'll to look at. I hope he gets traded to a team who will only win 2 games every year for the next 5 years.

@AB84 we better without you. Glad you would not have showed up!!
You are far from professional and absolute perfect example to kids… of what not to be. #BillsMafia would have burned your Jersey instantly..

@ab84 can’t wait to make the playoffs with a team that cares about each other, and you not be apart of it #billsmafia

Hey @AB84 maybe Vince McMahon will give you a WWE contract. Great #diva storyline there. You would fit right in.. #gobills #billsmafia

Hey @AB84… in 2 years when Josh Allen is a top 5 QB and you're on your way out of the NFL, you'll realize you messed up. Get rid of that blonde mustache, you look like a damn fool.

@AB84 the #billsmafia don’t need you. What an absolute jerk move. Have fun in the xfl, jerk.

Hey @AB84… in 2 years when Josh Allen is a top 5 QB and you're on your way out of the NFL, you'll realize you messed up. Get rid of that blonde mustache, you look like a damn fool.

AB, just saying…What if it IS true? Are you going to alienate us in the #BillsMafia right off? Or take to heart that there are HOF’ers who have stuck around Buffalo for a reason? We LOVE our football in Buffalo and we stick by our team 😁❤️

The only thing that would make that better is if Josh Allen shows out and the Bills make it to the playoffs. Missed your ticket Antonio.

The love for the city of Buffalo didn’t stop there, though, as more people weighed in and gave their two cents about why the place gets a bad rap. Here are some of those tweets.

Save your Buffalo / Bills jokes. Buffalo is an amazing, passionate NFL city. Great fans. Great place to play. Josh Allen is going to be great. Bills moving in right direction and are closer to playoffs than Steelers. Shame on AB. Not surprising but shameful.

People who have never been to #Buffalo just don’t get it. Reducing it to being a boring place that snows all the time is ignorant & tired. The people, the food & the sense of community is second to none. There’s a reason many fall in love with the city when they give it a chance.

A lot of #Buffalo shit talking today. It’s pretty unfortunate because if you came here you’d definitely think better of it.

Plus anyone who looks me in my ocular cavity and says Green Bay Wisonsin is a better city to live in is lying to me and themselves.

Look, I’m sure Buffalo is a great place to live, work, raise a family and jump from the top of RVs onto a burning plastic table prior to Bills games. But, come on, having a superstar like Antonio Brown going there to play for an organization that’s had one playoff appearance since 1999 after playing for one of the top franchises in all of sports is a serious demotion. But, hey, love the pride Buffalo folks have for their city — just don’t expect many people to change their perception and start booking vacations there anytime soon.