South Carolina Fans Called Robert Moore An ‘Oompa Loompa,’ So He Hit An Absolute Moonshot And Bat Flipped In Their Faces 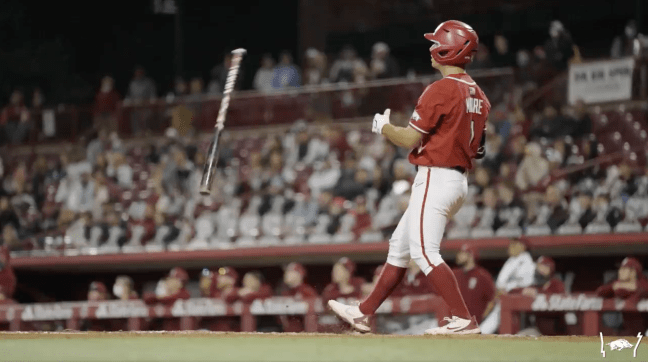 College baseball is the most fun form of the game. You get fence-smashing errors, sassy ejections, maniacs on the mound, home run hammers and beautiful poetic justice. Arkansas infielder Robert Moore is the perfect example. The top-ranked Hogs traveled to Columbia, South Carolina for a three-game, Thursday-Friday-Saturday series against the No. 11 Gamecocks and got things started with a dominant 6-1 win to open the weekend. At the forefront of the Razorback runs was the 5-foot-9, 170-pound Moore.

There is no denying that the sophomore second baseman is vertically challenged, but that doesn’t mean he can’t pack a punch. Moore stepped up to the plate in the top of the second inning got ahold of the first pitch he saw.

He knew it the second he made contact and dropped his bat accordingly.

The home team got on the board in the fourth inning and the game remained tied at one until the seventh, when Moore got up again. Heckling is a big part of college baseball fandom and the student section often comes prepared— here is the guide to proper chirp artistry. In this instance, the Gamecock faithful chose to get on Moore for his height, even though he had already hit a bomb on the day. It’s never a good idea to mess with someone who is playing hot, but they proceeded to do so anyway and called him an “oompa loompa” as he walked back up to the dish. Well, he got the last laugh.

Attn: South Carolina student section: y'all done poked the wrong bear. The fans start chanting "oompa loompa" as #BobMoore stands in the box… And guess what he did with the very next pitch? Nah, you know what he did. Two-run jack, and a no-doubter. 3-1 @RazorbackBSB, T7. pic.twitter.com/K7cSNfIzK9

Moore’s home run was gone the second that he made contact and it went VERY far, bouncing once before exiting the stadium. His bat flip may have gone farther than the ball.

The retribution put Arkansas ahead 3-1 and the nation’s top team went on to win 6-1. It was a great opening game for the Razorbacks, but the nature in which it occurred was very contradictory. Hog fans are notoriously anti-fun. They complain about “the integrity of the game” when an opponent pretty much does anything that could be considered “disrespectful.” Like this celebratory high-five in particular:

Arkansas fans HATE it. Thus, by their standards, Thursday’s win over South Carolina should be negated because of how disrespectful it was to the game.

Moore’s bat flip was awesome. If you’re going to talk shit, be prepared to get hit. Or just don’t talk shit to a player with a .986 OPS, 10 HR and 36 RBI to begin with. The Razorbacks are on a roll at 31-6 on the season and are making some incredible plays in the process.

Moore and Arkansas will look to continue their blazing hot stretch in Game 2 on Friday night.