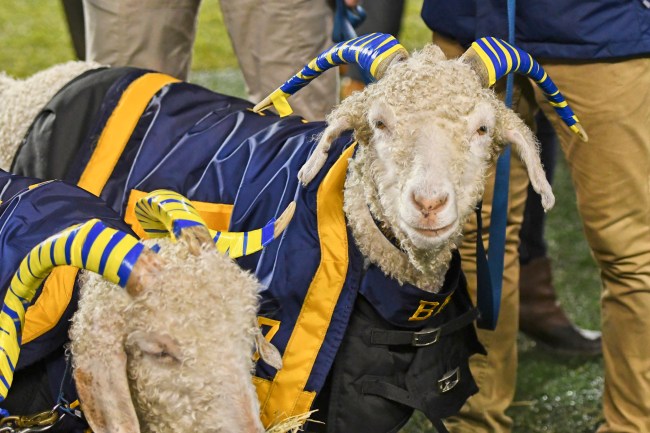 Although America’s Game does not kickoff for a few more weeks, Army is getting ahead of its rivalry with Navy. However, the West Point cadets failed miserably and kidnapped the wrong goat.

Over the weekend, U.S. Military Academy cadets traveled to a farm near Annapolis, Maryland. It is the home to the U.S. Naval Academy’s mascot Bill No. 37.

Bill belongs to a very long line of goats with the same name. All Bills before him and all Bills who come after him will all stay at the same farm.

Kidnapping mascots is a decades-long tradition amongst the service academies. And despite it being officially off-limits since the early 1990s, a group of cadets decided to take Bill No. 37 as their own.

Upon arrival to the farm, they gave chase to the spooked goats. Amidst all of the chaos and large amounts of bleating, the West Point cadets were successful in capturing one of the goats and took off back to campus.

There was only one problem.

Bill No. 37, the current mascot, is youthful and of great health. Bill No. 34, the goat that was kidnapped, is a 14-year-old retiree with one horn.

“The U.S. Military Academy and the U.S. Naval Academy are disappointed by the trust that was broken recently between our brothers and sisters in arms. These actions do not reflect either academy’s core values of dignity and respect,” read a statement attributed to superintendents Lt. Gen. Darryl A. Williams and Vice Adm. Sean Buck.

Bill No. 34 has since been returned to the farm. Meanwhile, Bill No. 37 was in the corner snickering at the failed attempt. At least, that is what I like to imagine.