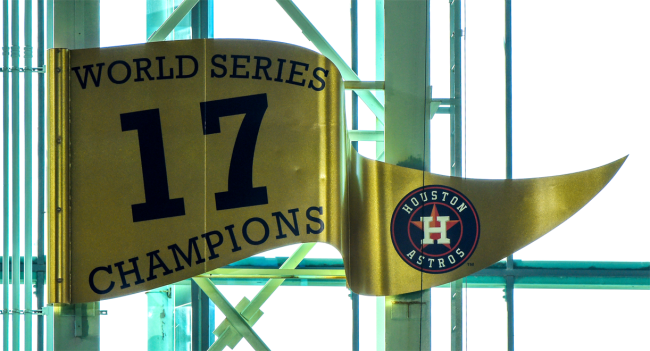 The Houston Astros’ 2017 World Series banner has gone missing from the plaza outside of Minute Maid Park, much to the delight of many baseball fans.

It turns out that if Major League Baseball won’t strip the Astros of their tainted 2017 championship then someone, or some thing, will. Or at least try.

According to the Houston Chronicle, the metal 2017 World Series banner is one of several in the Minute Maid Park plaza on Crawford Street near the center field entrance that celebrates all of the team’s postseason appearances, including division titles, division series wins, league championships, and the 2017 World Series.

The banner, according to the Chronicle, “appears to have been ripped right off the metal pole” that it was attached to and 2018 division series championship banner located below it also suffered some damage.

Never fear though. The gigantic gold 2017 World Series banner which hangs behind the Crawford Boxes in the outfield is still in tact.

The Astros said on Sunday that they were “looking into the matter.”

On Monday, the Astros told KPRC 2 News that the missing World Series banner was not stolen, but had disappeared due to something “was weather-related.” Whatever that means.

The team also did not specify when the banner will be re-installed, or if the original will be put back up or if it will be some sort of replacement banner.

Baseball fans, still angry over the cheating scandal that rocked baseball in 2020, were more than happy to learn about the Astros’ 2017 World Series banner going missing.

It all comes full circle, the jokes write themselves 😂

Interesting, that stolen sign is gonna end up in a trash can.

Was it replaced by a trash can?

Put this up there pic.twitter.com/Ozk6L72YvA

So someone stole signs?