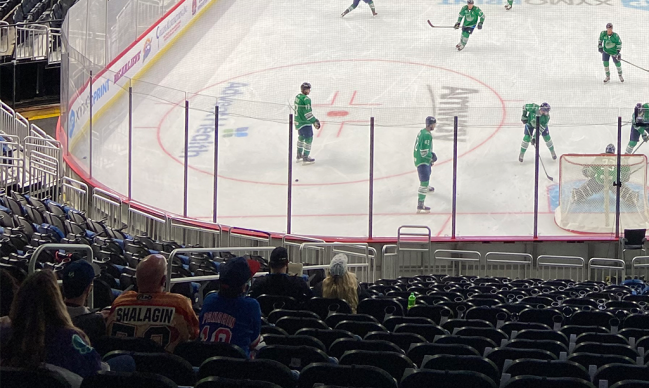 As an unabashed introvert, when I discovered I’d been advised to stay home and avoid other people as much as possible for the good of humanity last year, I can’t say I was as devastated as so many members of the population seemed to be.

I got to breathe an incredible sigh of relief after realizing I no longer had to make up an excuse whenever I wanted to get out of doing something I regretted agreeing to, but the whole “isolation” thing got old much sooner than I’d anticipated, because despite my tendency to avoid public gatherings, I was still craving my two primary forms of social interaction: concerts and sporting events.

Heading into 2020, I was amped to get to see musical acts including Primus, Tool, Stone Temple Pilots, and The Smashing Pumpkins perform live. Sadly, all of those shows were canceled faster than a draft pick who made a problematic joke on Twitter when he was a sophomore in high school. I also saw my hopes to attend the Indianapolis 500 dashed by the pandemic, as those plans were appropriately torpedoed like the ship Quint talks about in Jaws.

However, a few months ago, I moved to everyone’s favorite wang-shaped peninsula: Florida, which is one of the few states that’s currently allowing sports fans inside stadiums and arenas. As a result, I weighed the risks and ultimately decided to whet my live sports whistle by snagging tickets to a game between the Orlando Solar Bears and the Florida Everblades,

If you’ve somehow never heard of either of those squads, they’re both members of the East Coast Hockey League, an organization that is essentially the NHL’s version of MLB’s Double-A division and sits one tier below the AHL. The Solar Bears are part of the Lightning’s farm system and play their games in the Amway Center, which is where I watched them face off against the Everblades (the Predators’ ECHL affiliate).

I didn’t really know what to expect before I arrived at the rink, and while Florida’s reputation for ill-advised decision-making precedes itself, I was slightly reassured knowing masks were required to enter the arena (which wasn’t a huge issue for me, as face coverings have joined the Holy Trinity of the wallet, phone, and keys I always make sure I have on me before walking out the door).

I made my way into the building that primarily serves as the home of the Orlando Magic an hour before the puck was scheduled to drop before entering a concourse that was largely empty aside from a few staff members handing out Solar Bears-branded gym bags flanked by the dispensers of hand sanitizer that were in bountiful supply.

Before the previous season was derailed, the team saw an average of 5,632 fans attend their home games, which isn’t too bad for a city in Central Florida that relies on theme parks instead of beaches to get people to flock to it. This year, however, that number had dipped to 2,250 in the contests preceding the one I attended, and all of the empty seats were outfitted with a strap in an attempt to keep me and my fellow minor league hockey revelers relatively distanced from each other.

As far as I’m concerned, there are few things better than watching a game in a sold-out venue. Now, I’m not one of those people who thinks you can solve all of life’s problems with healing crystals and positive thoughts, but there is something to be said about the energy generated by tens of thousands of fans singularly rooting their team on.

With that said, I also like my personal space; I’m the kind of guy who gets on a plane to find the seat next to me empty and then spends the rest of the boarding process praying to various deities that it’s still vacant when the door closes. As if being elbow-to-elbow with a total stranger wasn’t unpleasant enough, you also risk having to deal with the potential small talk, and I’d rather have toothpicks shoved under my fingernails than have to deal with those unsolicited conversations.

As a result, these social distancing measures were an absolute godsend. I was finally able to experience a game without spending the entire contest engaged in a battle of my own over an armrest or having to get up every other whistle because of the guy in my row dealing with an enlarged prostate. It was everything I’d ever wanted and more.

However, I figured this would come with some tradeoffs and assumed the diminished capacity would have a big impact on the crowd noise and the overall vibe I’d become accustomed to. I wouldn’t exactly describe the atmosphere as “electric, but at the same time, I was shocked by just how much the barn was rocking. Every big hit, scoring chance, and goal was met with a huge burst of excitement that made it easy to temporarily forget the cavernous building I was inhabiting was filled with fewer people than I’ve seen at some high school hockey games.

As we saw when the Avalanche kicked off their season this week, in-game entertainment—a hallmark of any minor league game—understandably looks a bit different this year. The combination of masks and the infectious disease they’re intended to combat means the Kiss Cam is out of the question, but fans still got the chance to wave and dance in an attempt to get their five seconds of fame on the Jumbotron.

Shades—the sunglasses-wearing polar bear who serves as the team’s mascot—was also forced to do the majority of his mascotery in the corner of the rink he was exiled to instead of mingling with spectators, but I can’t say I was too disappointed by that development because I’m not an eight-year-old child.

The AHL cited revenue issues as a major factor in its decision to cancel the remainder of its season last March, and I couldn’t help but wonder exactly how it was feasible for teams to pay players, coaches, and all of the other people who make the games possible in the first place when concessions, merchandise, and ticket sales have taken such a hit.

Once the game started, I got my answer. It appeared the marketing team had been working overtime, because basically every single occurrence seemed to be sponsored by one of the local businesses that were seemingly very eager to give away free swag to anyone willing to attend.

When the Solar Bears scored the first goal of the game, I learned I’d scored 20% off breakfast at a local diner, but that was just the beginning. They eventually put the puck in the net three times, which meant I was entitled to free pretzel bites at a bar down the street, and because that was enough to win the game, I also got a coupon to use at participating Pizza Huts in the Orlando area. Part of me expected to get a free oil change because the head coach spent more than 25 seconds at the urinal between periods, but sadly, I still have to pay for my next one.

The experience was much closer to the “real” thing than I ever would’ve anticipated, and while the safety aspect was always in the back of my mind, I never felt like I was putting myself in any real danger at any point. As a fairly healthy 25-year-old guy, I’m not in the “high risk” category, but I’ve still been wary to go anywhere that’s absent of the common sense that’s sorely lacking in a lot of places. Thankfully, the arena wasn’t one of them.

Now, I personally decided getting to watch hockey in person was worth the potential risks that came with doing so during a pandemic. You might think I’m crazy for thinking that, and guess what? You’re allowed to—and you’re also allowed to not do what I did. The Solar Bears did not stuff the aforementioned bag I got with wads of cash to bribe me to write something encouraging people to do what I did, nor did they drag me off of the sidewalk and give me The Clockwork Orange treatment by strapping me to a chair and forcing me to watch the entire game without being able to blink.

All in all, I’m glad I went and I’d be down to do it again. I never thought I’d actually be looking forward to being sandwiched between people in a packed arena again, but until that day arrives, I’m happy to settle with an experience like this one.