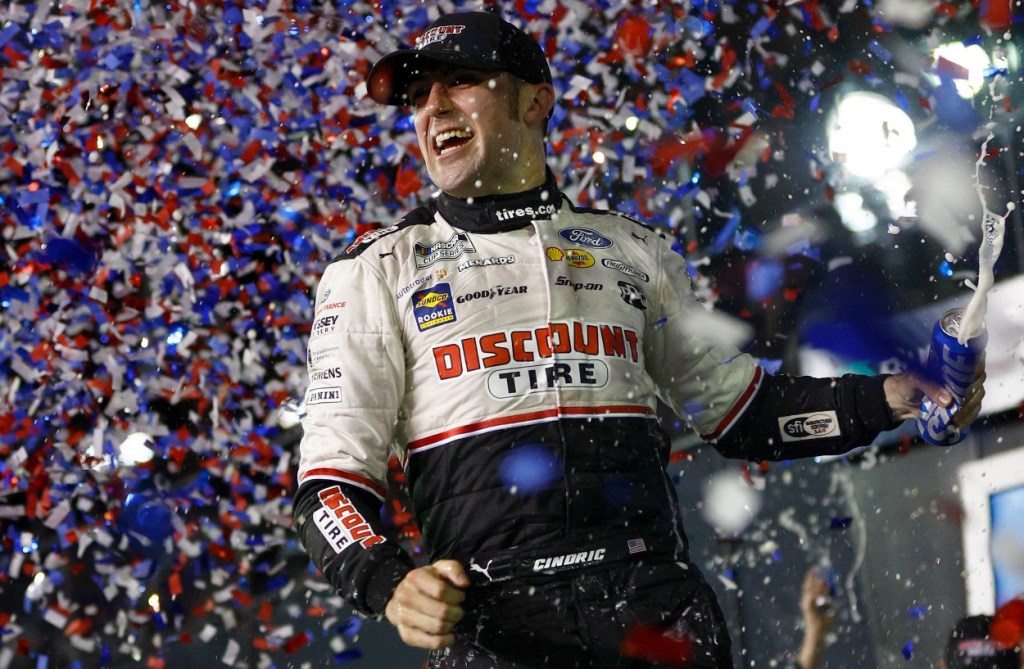 This year’s Daytona 500 was a huge success for Nascar. So much so that viewership of the Daytona 500 actually beat the NBA All-Star Game’s ratings. After an electric finish, Austin Cindric became the 3rd youngest winner in Daytona 500 history!

Austin called his win a “dream come true”, adding that it’s “every racer’s dream to just go to the Daytona 500 and compete.” He sat down with TMZ Sports after his win to talk about what it was like and how he celebrated.

Cindric explained how this wasn’t just a regular win, it’s “the biggest race of the year” and he was able to secure his first-ever Nascar Cup Series win in Daytona after an overtime restart. Winning in that fashion is about as good as it gets for any young racer dreaming up glory one day.

So how does one celebrate his first-ever Nascar win and the biggest moment of his life? For Austin Cindric, he celebrated winning the Daytona 500 by going to Steak ‘n Shake just like I used to after Little League games or in college after we left the bars.

Daytona 500 Winner Austin Cindric Talks About How He Celebrated

Here’s the TMZ Sports video interview but I’ve also included his quotes below that if you’d rather read instead of watching. I like to give you readers as many choices as possible:

Here’s what Austin Cindric had to say:

“We took everybody, including the Harley J. Earl trophy, and we went to Steak ‘n Shake. We closed the place down after midnight, and they stayed open for us, and we killed a bunch of burgers and milkshakes.”

I knew I was going to have a pretty early morning the next morning doing the Champion’s Breakfast and touring and all that. So I went back to the hotel, me and my pops hung out in the hot tub and hashed things out and compared notes on people we had heard from. And kind of got on the phone with a few family friends.

But I can tell you that the crew went out and had a really good time because I saw them the next morning and they looked rough. They deserved every bit of it too, man. It was a lot of fun and I know the fun’s not over yet.”

Going back to that part about Steak ‘n Shake closing at midnight, this was a revelation for me. The Steak ‘n Shake in my hometown has always been until the wee hours of the morning. I looked it up to see if that was still the case and it closes at midnight now! Steak ‘n Shake used to be the spot where you’d see drunk people fighting at 3 am if they thought they were too good for Denny’s or Waffle House.

Prior to winning the 2022 Daytona %00, Austin Cindric had only appeared in 7 Nascar Cup Series races, seven last year and one this year. In the seven races in 2021, he only recorded a single top 10 finish.

From 2017 through 2021, Austin appeared in 133 Nascar Xfinity Series races where he saw considerable success. He notched 13 wins and 89 Top 10’s in those 133 races. The future definitely looks bright for this Daytona 500 winner.