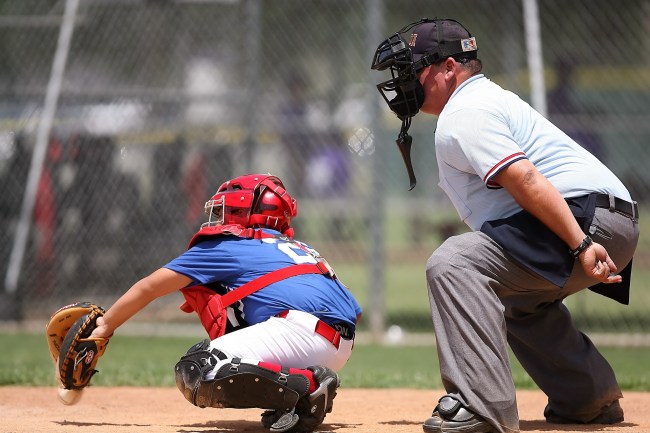 The only thing worse than bad referees at a sporting event is a group of helicopter parents hiding behind a pint of Pinot Noir in a flower-printed coffee tumbler running their mouths because little Tommy has more K’s than a passive-aggressive girlfriend’s text thread.

And by ‘worse’ I mean best, for everyone who wasn’t directly involved.

On a Newport Harbor (CA) baseball field, an umpire straight up quits mid-game after Bake Sale Becky and her husband Ned (names cannot be confirmed) decided to get personal after what they viewed as a sub-par job from an umpire hired to call a U13/U14 baseball game.

This guy's fed up pic.twitter.com/sf4sNSHuZ6

Bake Sale Becky should be banned from every PTA meeting ever after literally picking at the scab of this ump’s deepest, most profound insecurity in front of dozens of people and another 300,000 online.

I mean seriously, how about the fried feta balls on Bake Sale Becky for dressing this poor bastard down who’s probably making like, what, 15 bucks an hour? Becky makes more than that selling one bunt cake when she sets up a stand outside Tommy’s scholastic book fair despite backlash from Principal Anderson that she doesn’t have a permit.

Becky, who I’d venture to guess is a good 30 years removed from her prom queen runner-up days, is taking heat online for calling this ump shorter than her and Ned’s anniversary fuck.

Uh. He is NOT the problem.

That's why Parents are the worst at sporting events..

Only logical choice after that pic.twitter.com/fOeiXf7Lw1

It remains to be seen how this incident will affect sales of  Becky’s gingerbread men at the middle school holiday bake sale.