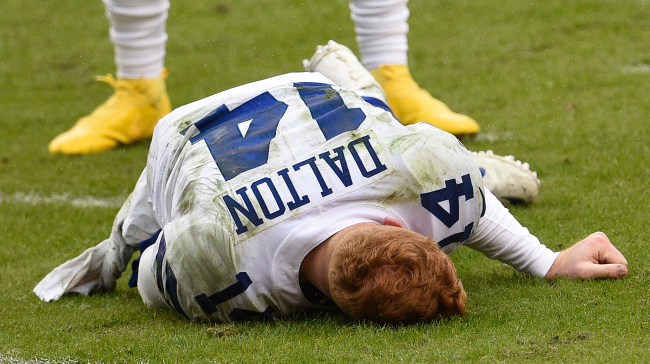 What is the problem with the Chicago Bears? Why does a team with such a rich football history and in such a massive media market struggle so hard to find a good quarterback?

And here we all were thinking that the Cleveland Browns were the team that had problems at quarterback all these years.

Only Rex Grossman and Jim McMahon were able to steer the Bears to a Super Bowl over the past 70 years (winning one plus the 1963 NFL Championship Game with Billy Wade under center), and Luckman, with 14,686 career passing yards, is still number two on the Bears’ all-time passing list (behind Smokin’ Jay Cutler with 23,433 yards).

Now, the team’s latest “franchise” quarterback is Mitchell Trubisky – the second overall pick in the 2017 NFL Draft – and we all know how that’s been working out.

And while the Bears are reportedly in the market for Russell Wilson and have been going after him hard, on Monday and Tuesday, NFL insiders were claiming that Chicago is strongly considering signing former Bengals and Cowboys quarterback Andy Dalton.

The next QB domino to fall could be Andy Dalton and one league source said he believes the Red Rifle could be headed to the #Bears. https://t.co/4ojjalQkHj

Needless to say, with the team’s history at quarterback, the thought of the Bears signing Dalton and having even the slightest chance to take over for Trubisky as Chicago’s starting QB is not sitting well with the team’s fans. Not. At. All.

If some combo of Trubisky, Foles, Dalton, Minshew, Mariota, Darnold, Smith, or one of the 49ers QBs is/are the QB(s) in Chicago this season can we all go to Halas Hall & protest? I can't believe owners of billion $ org can get away w/ not doing their jobs well year after year...

I’d rather take the field with no qb

This would be the most Bears thing to ever Bear.