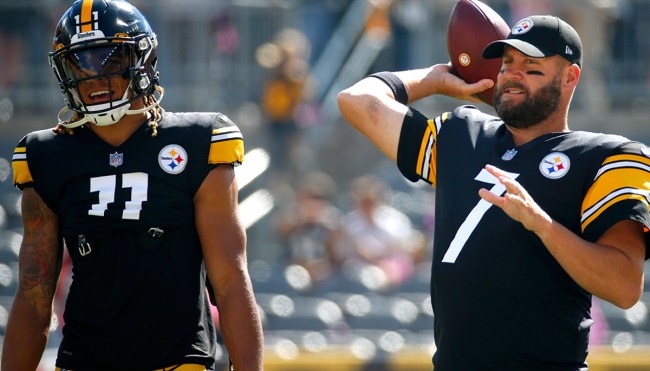 The Pittsburgh Steelers had the chance to cap off a dramatic comeback against the Vikings with a last-second touchdown on Thursday night. Unfortunately, the team ultimately saw its attempt to crawl back from the 29-0 deficit it was facing in the third quarter fall short with an incomplete pass in the end zone in the final play of the contest.

However, as many people were quick to point out, the Steelers likely would’ve been able to run at least one more play if it wasn’t for the major brainfart Chase Claypool suffered earlier in the drive, as the wide receiver unnecessarily allowed valuable seconds to tick off the clock by briefly showboating after keeping Pittsburgh’s hopes alive with a clutch reception on fourth down.

so dumb, so clueless pic.twitter.com/cy7wSkv4XE

Tons of people quickly ripped into Claypool for the mistake, but that group didn’t include Ben Roethlisberger, who gave ESPN’s Brooke Pryor a very interesting response when he was asked if he planned to talk to his wideout about the incident.

Roethlisberger on Claypool: "It’s not really my job. To me, that goes up to Coach Tomlin. That’s what he needs to do. That’s his job as the head coach. As the QB, it’s my job to help manage what we do on the field .. Dealing w/ player issues … that’s the coach’s job, not mine. pic.twitter.com/BFbjlrbp8V

Big Ben has been roundly criticized for his less-than-stellar play over the course of a season where the Steelers are currently sitting at 6-6 (one that could reportedly end with him hanging up his cleats).

You’d expect a veteran QB like Roethlisberger to embrace his role as a leader in the locker room instead of passing the buck to his head coach when it comes to “player issues. However, based on what he had to say, it seems like there’s a very good chance he’s already in High School Senior Who’s Three Weeks Away From Graduation Mode—a mentality that doesn’t exactly inspire a ton of hope.