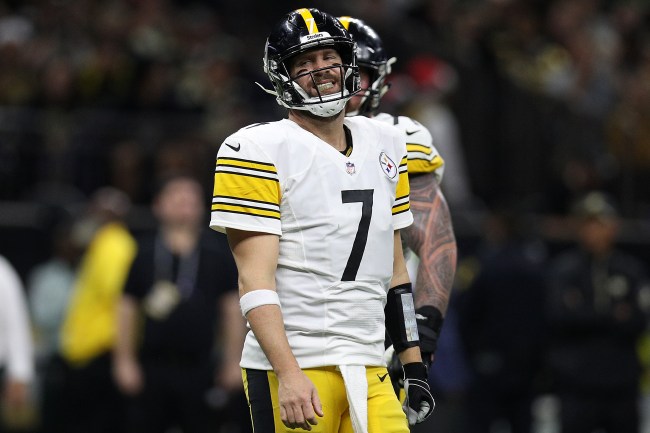 Ben Roethlisberger has two Super Bowl rings and is presumed to be a Hall of Famer when all is said and done, but that doesn’t mean that he necessarily has the total respect of his Pittsburgh Steelers’ teammates. That’s a narrative we’ve heard in the past, and, in a more recent feature from SI.com about the franchise’s dysfunction amid the Antonio Brown trade, other former teammates of Roethlisberger’s are throwing him under the bus.

The SI piece, written by Robert Klemko, spoke with former Steelers players Josh Harris and Isaac Redman, with both being highly critical of Ben Roethlisberger, with Harris even going as far as saying that the quarterback is the “real locker room problem.” Harris is also the guy who claimed Big Ben once fumbled in a game because he didn’t like a play call, adding that, “at that moment I knew what kinda person he was.” While that seems a bit extreme, the former running back didn’t hold back about his feelings towards Ben Roethlisberger.

According to Harris, Roethlisberger just wasn’t interested in getting to know his teammates, and that has come back to bite the Steelers.

“Ben is a great player but he doesn’t try to connect with teammates,” Harris told me this week. “During my time there, I had conversations with vets like, Heath Miller, William Gay, Cam Heyward, Darrius Heyward-Bey, Will Allen, Ike Taylor, Troy Polamalu, Bruce Gradkowski, even James Harrison, but never Ben. Troy made an effort to talk guys. Not Ben though. And it was like that for others too.

“He is close with the O-Line and maybe a few guys here and there, but for the most part he stays to himself. During practice when the team would be warming up a lot of times he would be sitting on the water coolers reading the newspapers. So when Ben is critical of players publicly without having a relationship with them, it can rub them the wrong way because they don’t know if it is out of love or what. And when you call out All-Pro guys, that definitely doesn’t sit well with them.”

Josh Harris’ criticisms come on the heels of Antonio Brown’s claims about Ben Roethlisberger, as the now former Steelers wideout said that the signal-caller has an “owner’s mentality,” and then continued to him publicly on HBO’s The Shop. If it seems like there’s one theme regarding Roethlisberger and his leadership or interpersonal skills, it’s that he lacks in that area, to say the least.

As mentioned above, the SI.com piece also spoke with former Steelers player Isaac Redman, who, like others, were critical of Ben Roethlisberger, adding that he think the quarterback has too much power with the team and franchise as a whole.

“He does have a lot of power in that team, and some guys like AB may feel like they should be on a different level, that Ben shouldn’t be criticizing him publicly,” Redman says. “When you just only see the guy in the locker room and on the field and you get to a radio show and you say something bad, it’s going to rub guys the wrong way. Some stuff should be kept in house. You come to them, you don’t put it out in the public. When you do that, you open yourself up to criticism.”

Redman may not be too far off with his analysis. Remember, Roethlisberger’s the same guy who had the support of his general manager, Kevin Colbert, who recently said that the quarterback can basically call out anyone he wants to, which includes Colbert himself. Giving one player that much power hurts team resolve, as it puts an onus on one player being above the rest of the men in that locker room.

As much as Ben Roethlisberger has been getting criticized, Isaac Redman did add that the quarterback was “never a problem in the locker room,” but that he just shied away from guys.

“I think everybody has different personalities,” Redman says. “Could he have done more to bring guys together? Yes, but he was never a problem in the locker room. I don’t think he shied away from guys, I just think he was really careful about who he surrounded himself with.”

Right or wrong, it’s not necessarily a good look for the quarterback and presumed leader of a franchise to play favorites. While people have different leadership qualities and styles, a good comparison here is Tom Brady, who is engaged with his teammates on social media and in the locker room, even though he’s by and far the golden child for the New England Patriots.

While current and former Pittsburgh Steelers players may not like the way Ben Roethlisberger does things, they’ll need to learn to adapt, because it’s not as if the franchise is going to get rid of the guy after all he’s done during his time in the Steel City. Still, this just proves how dysfunction that organization continues to be even after losing Antonio Brown and Le’Veon Bell this offseason.