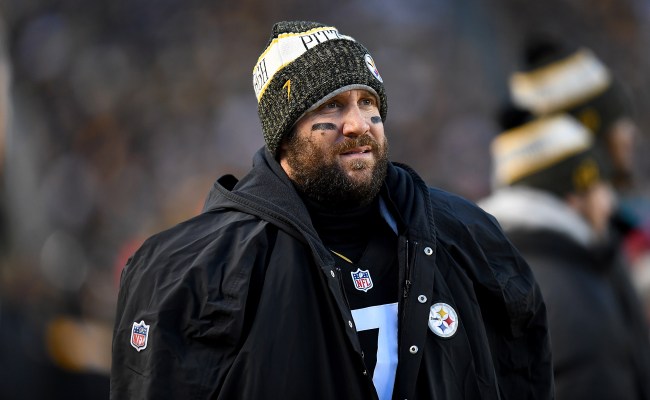 Ben Roethlisberger is one of the best quarterbacks of his generation, winning two Super Bowls and putting up gaudy stats for the Pittsburgh Steelers over the years. But the dude might be getting way too much credit for what he’s done for the franchise and not getting enough blame for his impact on all the dysfunction that’s been going on recently with the team over past couple years.

That’s because the signal-caller seems to have the front office wrapped around his finger, which, in effect, is giving Ben Roethlisberger all the power as the entire team implodes following the Antonio Brown and Le’Veon Bell situations. And the latest example of that came the other day, when Steelers general manager Kevin Colbert went on the radio and publicly OK’d Big Ben to call out whoever the hell he wants to because he’s won a Super Bowl — and that includes Colbert himself.

“Ben is the unquestioned leader of this group,” Colbert told reporters. “Like I said, he’s the elder statesmen and the Super Bowl winner. If our players were smart, they’d listen to him because he’s been there. He’s done it. He can tell them, ‘No guys, what you’re doing is or is not good enough to do this.’ And I honestly believe that that can be a burden on him more often than he may like to admit, because he has to — he’s got 52 kids under him, quite honestly. I want them to step up and say, ‘Hey Ben, what do I have to do? Can I do this better? What do we have to do to win a Super Bowl?’

“I think that once you win it, you’ve got 53 guys who can say what it took. Right now, he’s the only one, so I have no problem with him. He can call me out and that’s fine. What he does, I totally respect because I see him too many times win games for us and come through in situations. That’s why I talked about the Jacksonville game. He brought that team in. It was hot. It was nasty, and they weren’t allowed to get water. It was that immediate. Everybody over here right now. And the speech he made and the challenges he made, he backed up because he played better in the second half. He didn’t play well in the first half, and he said, ‘I’m the first one that needs to look in the mirror, and the rest of you better, too.’ So I have absolutely no problem with him.”

If there’s such thing as superstar treatment or franchise coddling, this has to be the definition of it, right? Don’t get me wrong, Ben Roethlisberger has surpassed pretty much all expectations after the Steelers drafted him out of Miami (OH) in 2004, all but putting himself in the Hall of Fame once he retires, but this is an insane thing for a general manager to say; especially publicly where Roethlisberger’s teammates can hear it.

Part of the reason why players like Antonio Brown and Le’Veon Bell are so upset with their situations in Pittsburgh is because of this — the organization seems to always support and side with Ben Roethlisberger no matter what the circumstance. In Brown’s case, he’s called out his soon-to-be former quarterback after reports surfaced of the two getting heated during a practice late last season.

Given the talent the Steelers have had in the past few years, it’s hard to argue that they’ve underperformed; especially when considering the New England Patriots keep on winning Super Bowls. And, while there’s no problem with a general manager coming out and supporting his star quarterback, the way in which it happened — basically giving Ben Roethlisberger all the power to say and do what he wants to — is probably one of the reasons why the franchise has been so dramatic over the years. Hell, not even Tom Brady has that kind of power in New England, and he’s basically the gold standard.